this is the place where lps are being talked about. it's important to talk about games being played on the internet.
Post Reply
294 posts

raocow skipped a textbox here. If you go into the first door in the P-switch tunnel before the column of brown blocks, you get to this room:

raocow
the death of the incredible huge
Posts: 3225
Joined: 11 years ago
Location: maybe the Wizards are the most complex, and the sales guys are up their daily

that's pretty clever and it's unfortunate I didn't pump into this.
the chillaxest of dragons 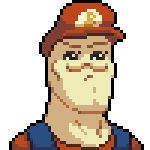 This was originally Ikemen Boon, but now he's gonna be American Boon.

Pfft, raocow chooses a different door after the midpoint, then wonders why it doesn't go to the same place.

Tried to rank the stages played so far on how much I liked them when I played them in VIP5.
S Rank (Crème de la crème):
020 Pushing Onwards With Blue Mega Mole 2
101 R Green Paradise
103 Really Dreadful Switch Palace
10B Run! Jump! Yellow Switch!
112 Luigi's Being Annoying
12B Red Athletic

no not lava cave i am not going there

no not lava cave i am not going there

lava, why must you be such a harmful creature?

So while vgperson's translation from eight years ago was pretty solid on the whole, I felt like I should comment on a rather glaring difference that people who are watching the old LP alongside this one will undoubtedly be struck by; she had the final textbox as "I want chicken" instead of "I want a baby". Now, the word under contention here is "kokko", which is indeed the kind of sound that a chicken would make in Japanese, and it also happens to be what Cuccos from Zelda are called.

The key here is that Saikano, which the box is quoting, is set in Hokkaido. This word is slang from that region referring specifically to fish eggs, but by extension also to babies of other species, including humans. In the context of Saikano, the text box reflects the character's fears that the changes which are making her into a machine of death have taken away her ability to give life, probably both in physical as well as emotional sense, as far as I understand it anyway. Of course in the context of this hack it's just a random quote that's entirely meaningless unless you know what it comes from, same as the first box.

With raocow finishing the Blue Switch Palace/Super Malice World, it made me wonder: is there an earlier point that your can actually hit any of the previous blue switches?

This Eye o' Mine wrote: In the context of Saikano, the text box reflects the character's fears that the changes which are making her into a machine of death have taken away her ability to give life, probably both in physical as well as emotional sense, as far as I understand it anyway. Of course in the context of this hack it's just a random quote that's entirely meaningless unless you know what it comes from, same as the first box.

I keep meaning to go back to Saikano. I've only seen the first two episodes.

Not to be confused with Saekano.

In case anyone was curious, I might as well lay out the blue switch a little bit:

If you don't have the green switch pressed and take the upper route at the midpoint, a door will lead you to an alternate version of the second half raocow went through, with the only difference being that most of the enemies are removed. This means that it the level becomes purely a timing challenge with the flashing spikes, so I'd still say it'd be pretty hard to go through.

If you jump over the fake floor at the blue switch in any of the two versions, there's a moon and another blue switch at the end of the corridor.


jayScribble wrote: With raocow finishing the Blue Switch Palace/Super Malice World, it made me wonder: is there an earlier point that your can actually hit any of the previous blue switches?

I really don't think so, though I don't know with absolute certainty.
this is getting laundromatic
Top

jayScribble wrote: ↑ With raocow finishing the Blue Switch Palace/Super Malice World, it made me wonder: is there an earlier point that your can actually hit any of the previous blue switches?

All of the blue switches in the first room are actually not real, they're just concrete blocks essentially. The ones in the second room are all real, so if you managed to somehow get to them they would probably work. However, they're surrounded on all sides by solid walls, so you'd have to get in there by cheating or glitching.

I only just realized that these spinies are supposed to be crabs. I thought they were just little heads with red pigtails or something on the sides.
Top

date-rape drugs. (whether what occurs is rape or murder is sort of ambiguous however, the original copypasta used the term "I totes died lol", to translate it more or less to English)

(spoilered for those stingy about spoilers, if you're worried you may be triggered by it please look ahead in advance)
twitter (spicy at times!) | romhacking twitter (cats!!!) | GitHub | avatar by kuma

Re: VIP 5 2019 - Like school closure on exam day to the kids who haven't studied

It's interesting to note that some critical moments of today's puzzle level were actually 100% the same compared to the first puzzle level with a similar name in VIP 4. Specifically, in that level you also had to bring a baby red Yoshi up a vine and feed him a powerup, in order to be able to advance in other puzzles of the level.

Of course, that level in VIP 4 can be super easily broken (which raocow did, not that I blame him) up to a point where you never actually see the baby red Yoshi at all and in turn never get to see how everything works out with the vine etc.

I do wonder how today's level, which was crafted much more carefully, would have gone for raocow had he solved the VIP 4 level the "intended way".
this is getting laundromatic
Top

Re: VIP 5 2019 - Like one of those dreams were you're in school but you haven't actually been in school in real life for

I thought this would be appropriate for today's (first) level:

Reecer7
Crack is fun and nice and a good time!
Posts: 296
Joined: 5 years ago
Pronouns: he/him/his

Re: VIP 5 2019 - Like school closure on exam day to the kids who haven't studied

In Surprisingly Magnetic, Boon is revealed to be a magnetic monopole; i.e., he has a universal pole of north. Though some theories assert such things could exist, there is no experimental evidence towards it. Boon is a scientific marvel and must be studied closer.

That's all I can tell you. I'm not a physicist.
call me reecer6, not reecer7, please! gotta maintain that same internet brand. actually i'm cro-iba now, it's cooler

Of course this is pure speculation on my part, but I believe that what the game expected you to do at the flying section was either divebomb below the wall of red koopas or simply fly at a faster pace so you can fly underneath them, like raocow did on his winning attempt.

Once you're past them using either method, you can slow down your speed to a snail's pace by repeatedly pressing the B button, which I believe is what the message box was actually trying to teach you. It's a somewhat obscure flying mechanic that admittedly you don't encounter very often.

Oh man I wonder if there is an even more obscure flying mechanism that's required of the player later on in the game?? Foreshadowing.

There's also an additional hidden message if you go right instead of left at the blue pipe:

The reason it talks about the "room below" is because that's where the passage to the secret exit is located if you go through the level in the order the author imagined you would, at least on a first playthrough.
this is getting laundromatic
Top

The whole room before the flying section for the secret exit is a big reference to the Outer Wall in Cave Story, including the area below the stage with the moon and the midpoint room that sends you out through the wall. I think this does a pretty good job of recreating the feel of that area without just copying the layout.

A small protip for those who find the secret exit unreasonable, from the wiki:

1. Bring a cape to this screen of the Outer Wall climb. 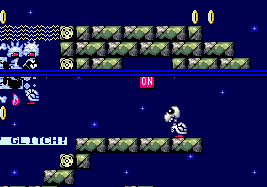 2. Keep the ON/OFF Switch off.
3. Spin fly to the upper right for a shortcut through the deadlock area. This will make the switch status the opposite of what it's intended to be.
4. Thus in the flight portion, the electric current will not be there, making it far easier to clear.

Ryrir wrote: ↑you can slow down your speed to a snail's pace by repeatedly pressing the B button

I have never heard about this before

Ryrir wrote: ↑you can slow down your speed to a snail's pace by repeatedly pressing the B button

I have never heard about this before

Yeah, it's not really commonly known I think. It's not something that is taught in any of the message boxes in the original SMW, and it's certainly not something you'd randomly decide to try on your own.

But I assure you that it is in fact a real mechanic.
this is getting laundromatic
Top

I wouldn't expect it to be taught in vanilla SMW cause I assume it's a bug if anything. I've never even played romhacks that required it though.

I, for one, would be afraid of studying Boon any further for he is very much a force of nature, perhaps one might even say a demigod, so it would be a fool's errand to even think of analyzing such a creature.