this is the place where lps are being talked about. it's important to talk about games being played on the internet.
Post Reply
290 posts

Sebby, when you're on thin ice for something and trying to make amends, being "sly and clever", "a risk taker", downplaying your own offenses saying "my problem is trying to help too much" which is backseating and "oh y'all will forget about it before long", demanding lists of your offending posts from people, attempting to dissuade other people from using spoiler tags (DKC thread), etc. is not going to endear anyone to your efforts, especially when all of that is literally the problematic behavior everyone is complaining about in the first place.

If you're truly sorry and you really want to make amends, then talking back, testing peoples' patience, and trying to paint your actions in a flattering light rather than owning up to them doesn't send that message. What does is erring on the side of caution and using. The freaking. Spoiler tags.

If you're not seriously willing to demonstrate actual change and you're just going to keep paying lip service to the issue, then quite frankly you're no better than nefer. And if you take issue with this comparison then I invite you to please prove me and Parama wrong by dropping the attitude, excuses, and deflections. Show us that you're sincere about wanting to be better by doing better.
Animal Crossing addict, A2XT Episode 2's vice admiral "The Project's Not Dead Yet" person, and certified Absurdly-Oblivious Fool

This is why we can’t have nice things.
Top

Out of curiosity, is it possible for a YouTube channel owner to ban individual accounts from leaving comments? Or does the entire comment section need to be shut down to stop such things? (Not that turning off YouTube comments is exactly a horrible drastic thing to do.)

I believe blocking a user on Youtube stops them from leaving comments on your videos.

raocow
the death of the incredible huge
Posts: 3285
Joined: 11 years ago
Location: maybe the Wizards are the most complex, and the sales guys are up their daily

That's the safest way to go when people like Nefer are in the comments.
Steam: ZephyrBurst
That guy that made Distorted Travesty.
Also, grackles visit me a lot.
Top

blocking someone makes them unable to comment your videos and dm you
there's been people blocked before though it was because they were extremely awful and gross
I think you can assign mods to your comments or something now too?
Top

I am all for blocking Nefer if only because it's probably the only thing that will get a meaningful reaction.

NeferNightbug
what shall we do with a drunken stoat-girl
Posts: 6
Joined: 3 years ago

This is why we can’t have nice things.

1. The "weigths puzzle" is vauge enough to make him start jumping at the bit to solve any weights puzzle.
2. He has access to all those weapons (maybe not the bomb, he doesn't spend enough time in the pause screen to really check.
3. Oh shit I just got called out by Plutia and now our relationship is broken forever.
4. raocow's got the right idea: selective ignorance.
5. The ones for the Hollow Knight I actually sort of planned: there was the introductory one, and newer ones more or less came with finding the Dreamers and the Radiance.

Creator of Night of the Mongolian Safari.
A Shinto god of insects with a Margay in their family tree.
Top

How hard is it to not spoil stuff? We already have gone through this garbage a couple of times with another member on here. Let raocow play the game himself. If he makes a mistake or misses something, let it be. The whole point is for this to be a blind run that he can enjoy and be frustrated by on his own, and you're taking that away by doing this.

Just chill. That's all we're asking here. He's asked for hints in other playthroughs before, and if you want to be vague after he says that in a vid, then say, "Yeah, you did miss something." or something to that effect. Anything further is just not cool, yo.
Top

The entire problem doesn't exist if you just
Don't post

Zinfandel I can't even read that, it's too small. But I did find the offending comment, and... I have to smack my head too.

Nefer, come here:
Point 1) That is not vague. At all. Even if it was, that isn't good enough around these parts. And rao doesn't need a nudge from anybody.
Point 2) You're name dropping stuff that hasn't even appeared yet. You can't justify that. Who cares if you have 'access' to it. Rao technically had access to the Axe from the beginning of the game, but you don't go name dropping stuff. People would have gotten upset if I mentioned there were 4 Fairy varieties, when only 3 had shown up so far.

churine wrote: ↑ I think you can assign mods to your comments or something now too?

That is totally a thing. I remember reading that was being done for Lucahjin's comment section for her Ace Attorney LP's.

Would be interesting the hear the thoughts of mods "extending their duties" to the youtube comment section.

Sebby19 wrote: ↑Zinfandel I can't even read that, it's too small.

Not sure why but they posted just a thumbnail of the actual image. Here's the full version for anyone who didn't want to hunt down the comment manually: 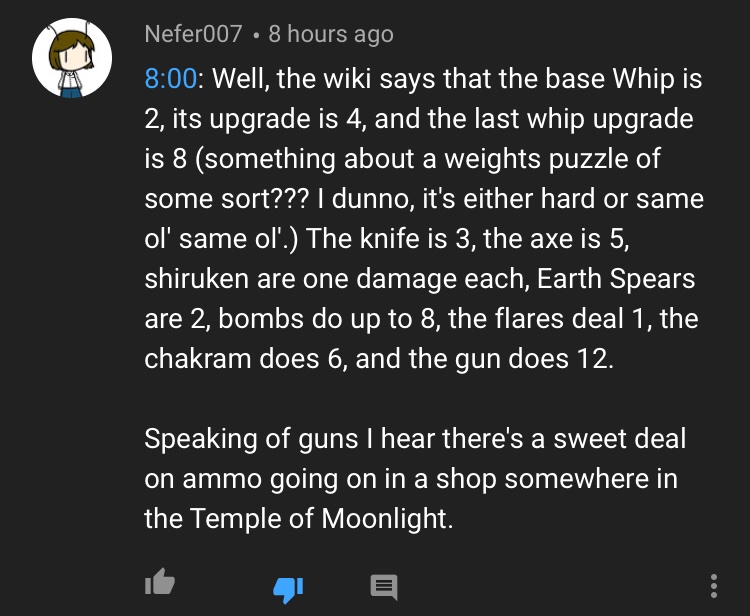 Some very blatant spoilers since even the things raocow could know are things he hasn't gone out of his way to figure out at all, nor has he asked anyone to explain them to him. (And with the last one it's just outright a spoiler.)

Alice wrote: ↑ Not sure why but they posted just a thumbnail of the actual image.

Because I was on mobile and thought I had gotten the correct link to the uploaded image. Sorry, y’all.

One thing I would like to suggest is that if someone reports 'Spoliers!', they should write exactly what is being spoilered. Like in court, you can't make accusations without backing it up.

It's frustrating when a mod just carpets an entire post in black. If only the actual offending part is just blacked out, I'd be a lot more inclined to go 'Okay, fine. That's fair'.
I saw last night my post near the top of page 27 in La-Mulana was censured. And I have no idea on the why or what. Was it the first paragraph where I name dropped the miniboss raocow passed by in the Shrine of the Mother? Or the 2nd paragraph, where I add onto the list of hanging threads that other people were making?
How am I supposed to learn if I don't know?

Anyways, back to the original point. The reporter having to explain exactly what needs to be spoiler tagged will also pretty much eliminate Yelsey's warning.

I'm not saying anybody is abusing it right this second, but the current system of:
-talkhauser: There's a spoiler there
-Copper: 'Kay. Done.
could be open to abuse by a BlackDS-like fellow, or some other smart troll. Especially if a mod is not familiar with a certian game. Or even be watching the current LP.

Sebby19 wrote: ↑ Anyways, back to the original point. The reporter having to explain exactly what needs to be spoiler tagged will also pretty much eliminate Yelsey's warning.

I'm not saying anybody is abusing it right this second...

That was actually directly aimed at Awoo, who reported his own post in this thread for no reason.

But you are right on one thing. Someone made a report about spoilers a few days ago, and honestly I could find nothing in it that looked spoiler-ish to me. Please do include in the report *what* exactly the spoiler is. I'm not following most LPs these days, and am often unfamiliar with the games in question, so simply seeing "SPOILERS!!!!" tells me nothing, which leads me to just spoiler tagging the entire post.

Well if you really want them to tell you what's spoilered, maybe don't black out the entire post at all? Cause I doubt the reporter cares what happens.

Anyways, if it's alright with you, I'll just unspoiler that one post either tomorrow, or whenever page 28 is created.

Sebby19 wrote: ↑ Well if you really want them to tell you what's spoilered, maybe don't black out the entire post at all? Cause I doubt the reporter cares what happens.

Anyways, if it's alright with you, I'll just unspoiler that one post either tomorrow, or whenever page 28 is created.

1. I wasn't the one who reported the post.
2. The post did, in fact, have a spoiler hint.
3. raocow has since solved the puzzle in question for which it was a spoiler.

The details for those who care:
This was Sebby19's post:


Sebby19 wrote: ↑ That miniboss just chilling in the Shrine of the Mother is Beelzebub.

Remember that you still haven't done what you need to do with the Pepper. You know exactly what to do, you just haven't found the correct face in the wall. Perhaps another world tour from the beginning is needed?

The last sentence of the second paragraph is a thinly veiled spoiler hint. The face in question where the Pepper is used is at the very "beginning" of the game: it's the very first face statue seen by the player when they enter the Gate of Guidance (the first area they enter in La-Mulana). Suggesting raocow commence a "world tour from the beginning" is a veiled, but still spoiler, hint as to where the Pepper should be used.

Man, sometimes I feel you guys take a grain of sand and run with it.