this is the place where lps are being talked about. it's important to talk about games being played on the internet.
Post Reply
482 posts

"Gee, I wonder what this button does~?" 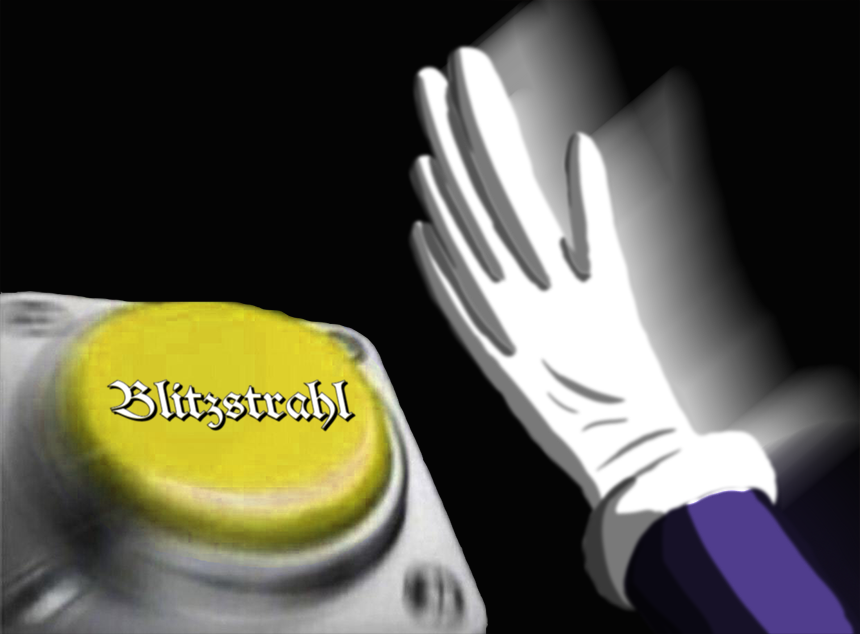 Anyway, the fact that the boss rush was justified as fighting against clones of your friends was really neat and recalls X8's boss rush, where instead of homunculi they used New Reploids.

Yeah, I got in the rhythm of placing a bomb on the ground just past the room's midway point, which vertical explosion managed to hit the core even with Iris's bobbing and weaving. I actually never organically learned that you could pick up, throw, or kick bombs.

As soon as I saw a G-Tank on the first screen I was like "oh they want you to stock up here, huh?"
I don't blame you, I think this game is aware of the weird exploits of Mega Man and totally intended that strategy.

Good job figuring out the weakness of almost everyone on the first try.

Iris 3! I don't expect anyone to get this one; the anime has a stub of a Wiki page and the game doesn't even get a page at all.

I'm definitely looking forward to the reaction to the Iris 4 Game Over screen, though. I expect uproarious laughter. Don't let me down! 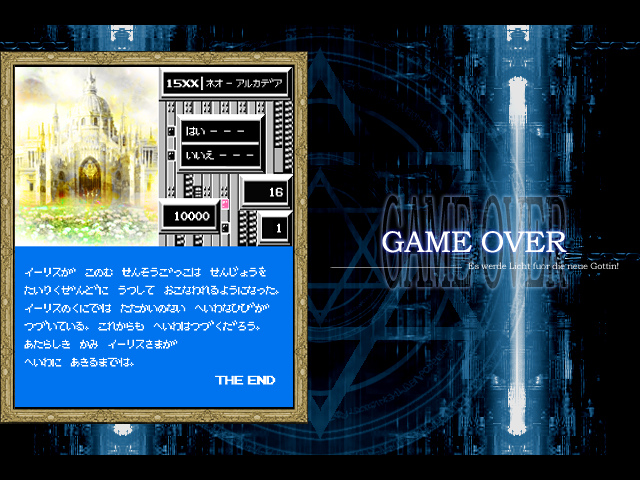 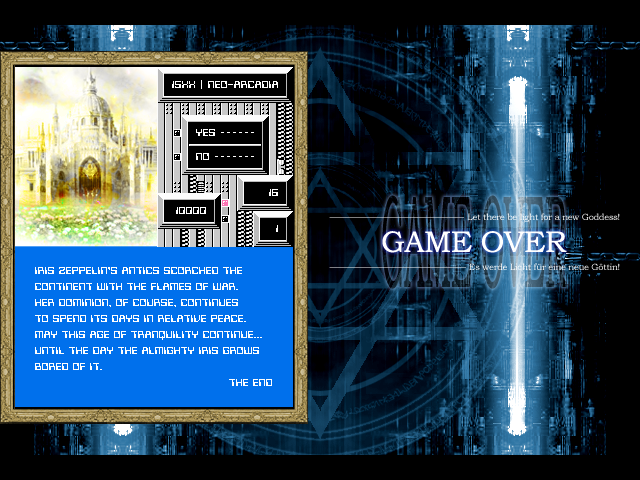 Kilgamayan wrote: ↑ I'm definitely looking forward to the reaction to the Iris 4 Game Over screen, though. I expect uproarious laughter. Don't let me down!

A request for raocow to showcase Grolla mode by playing one stage. Specifically, Grolla's own.
Top

I hope the sequel will be blind. The first game was great to watch.
Back of the class room, by the winows. ... I AM THE PROTAGONIST!
Top

Kilgamayan wrote: ↑ I'm definitely looking forward to the reaction to the Iris 4 Game Over screen, though. I expect uproarious laughter. Don't let me down!

Unfortunately, raocow did not Game Over

Talos: <Hey, young lady! Let me take you to that crimson-eyed brat that made a slave of me. Tell her when she bites it that Talos sent you!>
Spiritia: "Thank you, Talos. Lead the way!"
Talos: <Leave it to me!>

Talos: <...Whoops. Should've told her to hang on to my back first.>

A dragon who seemingly kidnapped Iris as part of the rebellion led by the RKS. In reality, he was mind-controlled by the "victim" as part of her grand ploy to turn everyone against each other. After Tia freed him by destroying the control orb, he gladly flew her over to Iris's chamber for the final showdown.

Trivia: Interestingly, his name was mistranslated previously as "Daroth" before the official translation fixed that issue up.

Kilgamayan wrote: ↑I'm definitely looking forward to the reaction to the Iris 4 Game Over screen, though. I expect uproarious laughter. Don't let me down!

And I'll wait for you to post it since it sort of flew right by. At least there was uproarious laughter for one moment today!
Top

I don't know if you started RKSF already, but if you start Grolla Mode and go to start immediately at the boss select screen, you'll notice something strange happened to Grolla's boss portrait. You can just play that one stage to show off a new, unique boss fight.

I'm actually slightly sad that you didn't see the final game over screen. I will say that you DEFINITELY do not want to miss the final one for RKSF, though.

EDIT: Also, it's a bit hard to notice it amidst all the things going on, but you were actually fighting on the title screen by the end of the fight.
Top

What's playing as Grolla like? Playing as Zero, of course.
And yes, the only unique boss fight in her mode is at the end of Grolla's own stage (which is otherwise unchanged).

Iris 3 Game Over is a reference to something called Time Stranger. Honestly, though, even if I knew more about it, I still don't think I'd be any more enthused for it when we have Iris 4 here for a hearty chuckle. For once, it is a shame we DIDN'T get to see a hopelessly dimwitted failure video. I hope you're sitting down~ 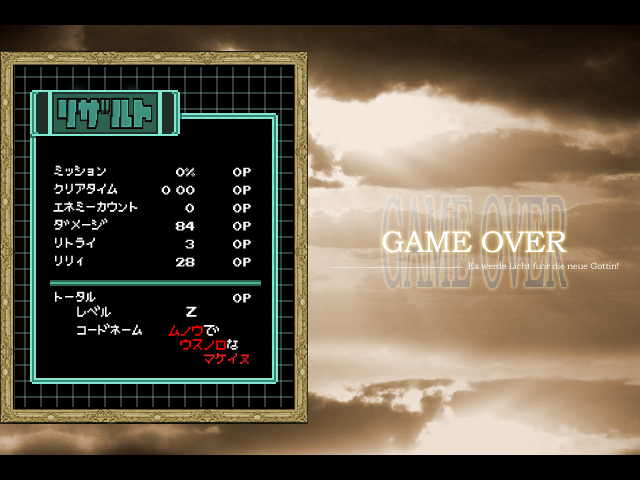 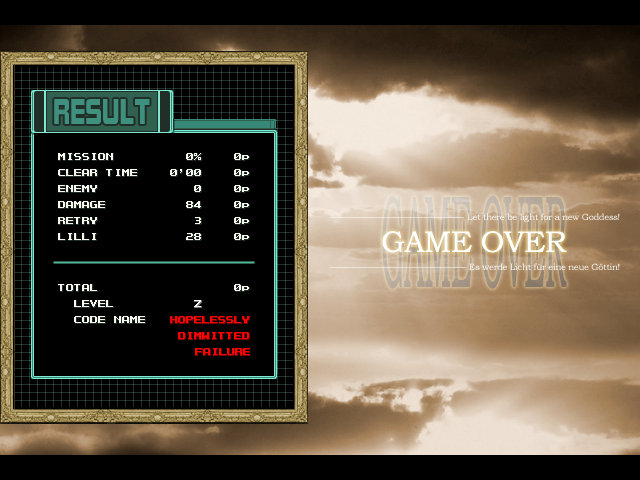 "Failure" is a really strange way to spell "edge boy".

at least i tried.png
Top

Oh man I'm so disappointed we'll never get to see a live raocow reaction to that now!

Talos is more of a castlevania rondo of blood reference than a Megaman reference. 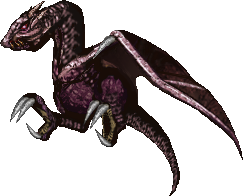 raocow, even if u don#t want to play the Secondary mode

you really should play at least Grolla's Stage in this mode to get a Special Boss fight only avaiable in this Mode. Control tip for anyone playing Grolla mode: you can press 1 on the keyboard to disable "double tap to dash." (You can use either "cycle weapon" button to dash instead.) I had a terrible time in Luste's stage until I found this feature.

I don't know why people want a standalone Grolla stage video for Grolla mode. Without the intro stage, it's going to jump you into the middle of the story, making the dialogue feel disjointed. And the boss is hard. Not a good idea to start a new character with what I think is the hardest of the eight bosses.

Just be aware that unlike Zero, she does NOT gain any new moves or anything, so it might feel bland doing the whole thing especially since she takes double damage for no good reason.
Top

ano0maly wrote: ↑ I don't know why people want a standalone Grolla stage video for Grolla mode. Without the intro stage, it's going to jump you into the middle of the story, making the dialogue feel disjointed. And the boss is hard. Not a good idea to start a new character with what I think is the hardest of the eight bosses.

I personally had more trouble vs. Sichte, but I agree that boss is tougher than the rest of the roster. Plus, unless I'm mixing up my memories again, Grolla's stage doesn't offer any Jesus Tanks. Definitely better to tackle that boss with at least one such tank in reserve.