So I linked to this on a few discord servers last night, but the thread for the asset pack expansion is up now! It's got a package of all the NPC, block, BGO, etc graphics between the A2XT2 repo and the SMBX basegame, so if you're interested in making new sprites for the project why not pop over, claim a few, and grab the sprite sheets?

ON THE STATE OF A2XT2

We'd previously announced during last year's Gifted Up raocow Party that A2XT2 would be released in 2018. As you've no doubt guessed, that's sadly not going to be happening. A lot of the development team have had unforseen events taking up this year that have prevented them working on A2XT2 nearly as much as they would have hoped, and it's meant we're having to delay the release of the development kit, and consequently, the game. We're just as annoyed as anyone about this, and it's super frustrating that this is what we're having to do.

However, please don't think the project is dead, it's still going, just slowly, and the dev kit is actually REALLY CLOSE to being ready. It's actually really just waiting on one thing, and for the sake of openness I'm gonna explain this.

The development kit just needs one thing that seems pretty mundane on the surface - text. A lot of the engine relies on more advanced text rendering than is available with the basic LunaLua text tools, but textblox proved to be unsuited to the task due to bloat and performance issues (to the point of sometimes freezing the game for upwards of 10 minutes, or outright crashing it). For a long while now, a replacement system known as textplus has been in the works that fixes these issues, and has only fairly recently got to a usable state. Unfortunately there's now the task of updating the development kit to utilise this instead of textblox, and cleaning up some of the workarounds needed to make textblox even at all functional. This is a fairly large task, and we were hoping to get it done by the end of the year. Alas, life gets in the way at the worst of times, and none of the development team has been able to really dig into these systems enough to finish this.

Which leads us to the current situation: The development kit is almost done. It's been almost done for a while, but progress IS STILL BEING MADE, and it will be released as soon as it is stable enough to be.

Once again, biggest apologies for this unfortunate turn of events, and we though ripping the bandage off now would be kinder than dragging things out for as long as possible.

It's a huge shame, and no-one is more disappointed than us, but we're going to get this done, we just need a bit more time.

Talkhaus sequels. They should have called this game A3XT, so that the double curse of the number two mightn't have fallen upon it. . . .

Can't wait for A2XT2 part 2 after this one comes out!

This is someone's signature.

"I don't like that universe I just created by accident . . ."
Top

Kshaard wrote: ↑ Can't wait for A2XT2 part 2 after this one comes out!

You joke but this has been seriously considered because it's hilarious.

My one fear is that once all this finally is finished and out for people to see and the projectback up and running publicly, the interest will have dropped too much and there won't be enough people around to actually finish a2xt2. hopefully this isn't the case.

SAJewers wrote: ↑ My one fear is that once all this finally is finished and out for people to see and the projectback up and running publicly, the interest will have dropped too much and there won't be enough people around to actually finish a2xt2. hopefully this isn't the case.

I've been quietly contacting people to gague interest and see if the outstanding claims are still wanted. There's plenty enough to finish the project, don't you worry on that front.

SAJewers wrote: ↑ My one fear is that once all this finally is finished and out for people to see and the projectback up and running publicly, the interest will have dropped too much and there won't be enough people around to actually finish a2xt2. hopefully this isn't the case.

I've been quietly contacting people to gague interest and see if the outstanding claims are still wanted. There's plenty enough to finish the project, don't you worry on that front.

How long ago was this?

It was spread out over a couple of months. I think the last person I spoke to was in October.

Then hopefully they're still interested a few months later. I guess we'll find out true interest when this stuff is done.

The talkhaus will never finish anything ever again prove me wrong

e: sorry this is mean I don't mean to sound like I am blaming you guys for the problems you mentioned. I was speaking more generally, not about these specific roadblocks.

This game has really ballooned in ambition though.
Well it is a decent hack but sometime its just too repetitif there no level that actually pop in your face and your like oh yeah that level they all ressemble themselves and just monster along the way.

I'm still waiting on a finalised list of levels for World 6. The removal of a certain someone's levels from World 6, not to mention improvements in graphics rendering, completely tanked my end of world level. Depending on the new list, I may need to redo the entire level from scratch.
Top 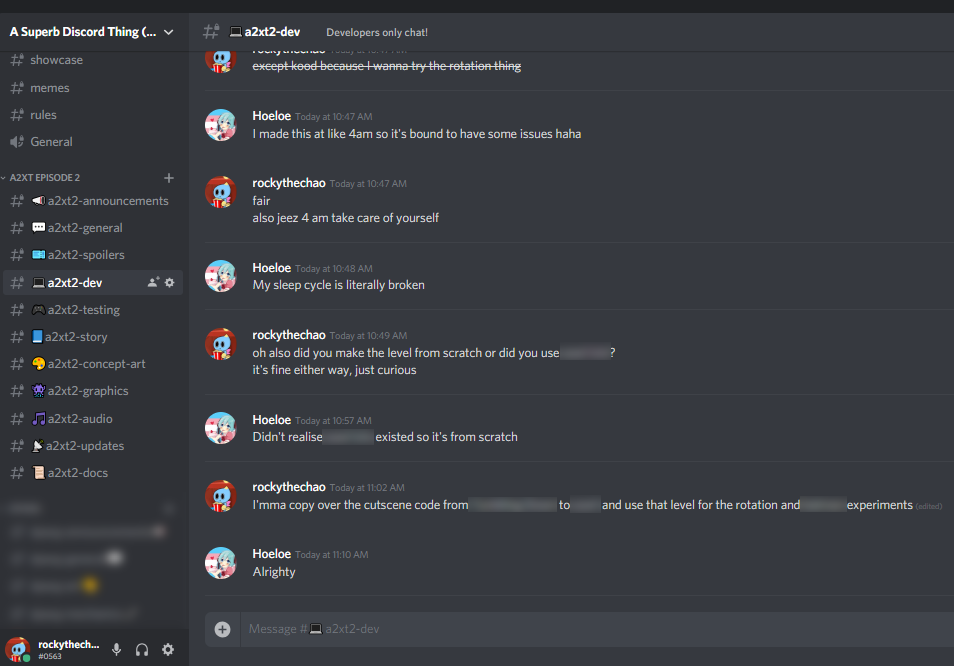 It exists.
But there's still a couple things we need to figure out with it so it's still not ready to go public.

We've almost entirely moved A2XT2 development over to this dedicated channel group, and in spite of life and other stuff still being a thing (including a side project that we occasionally chip away at for the sake of burnout recovery, that's what the blurred-out channel group is) work on the devkit is still chugging along. Most of the main systems are devkit-ready and now our main focus is documenting those systems: manuals for building towns, bosses, and cutscenes, and a message system guide complete with all of the markup language tags that allow for fancy text formatting and effects.

A couple of these guides are pretty much done and the others are getting there, but we can't finalize some of them until we know whether a partially-implemented editor feature will be finished. 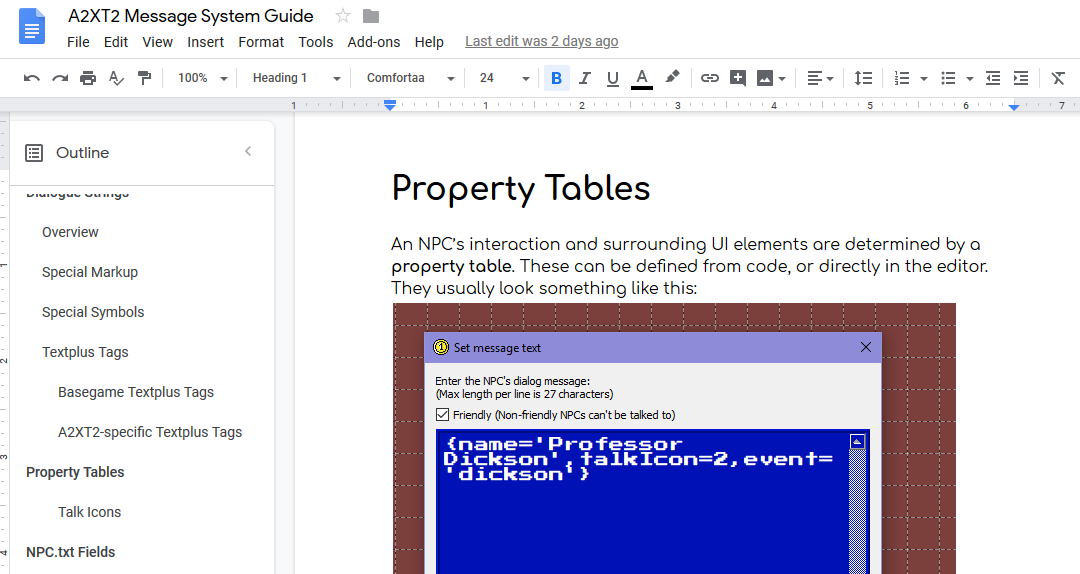 This is a screenshot from the message system guide. This is currently how you set a number of properties for NPCs. Seems kinda ugly and clunky, doesn't it? Surely there's a better way to implement extra NPC settings by now?

Well, those who've been keeping up with SMBX2's development will know that the latest versions of the engine actually do let you give NPCs additional settings as editor fields! Many of the new basegame NPCs already have their own extra settings defined, and a few of the A2XT2 devkit NPCs have some as well. 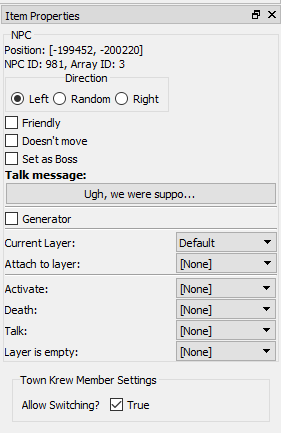 But here's the catch: you can currently only define these on a per-ID basis. There's currently no way to define an episode-wide set of extra settings for all NPCs. If you want to give every NPC the same set of fields, you need, at minimum, an ini file for every single ID and a JSON file for every NPC with its own basegame extra settings. We're talking hundreds of files, likely over a thousand, and the bloated filecount is only one of the complications!

So while those of us in the core team are working on the guides, we're also waiting on Wohlstand to give the editor support for defining episode-wide extra settings with a single JSON file. We won't be waiting forever and if it comes down to it we'll launch the devkit with the message text property tables, but we'd really like to be able to offload that stuff to editor fields if possible because they're so much more user-friendly! And if we can include them that means we'll need to update the guides accordingly.

After the guides are done, the only other big tasks left for the devkit are It's been a hell of a wait, and we're still not ready to give a new release window just yet, but aaaaaaaaaaaaa we're closer than ever to FINALLY releasing this dang thing so the full community can be involved again! Thanks to everyone for sticking with us all this time and being so understanding!

As promised, let's start the year off by talking about A2XT2 and the ASMT server!

A2XT: Episode 2
We mentioned in the December Event announcement that the devkit would release with an example level package and some documents. To clarify, the main devkit won't come with any world map or levels, just the episode's folder structure and assets. A separate example package featuring a boss, a town, the game's full four-level prologue, and a small fishmarket ("guppy market") world map connecting them will be released as its own download.

The documents will consist of the following Google Docs, whose links will be shared on both the forums and the A2XT2 channel group in the server:

We also noted that some content and materials won't be released immediately with the devkit; we originally wanted to have these things ready to use and work on right away, but in the end we decided it would be best to delay them for the sake of pacing the game's continued development and getting the devkit out sooner. The following things will come later in the first half of 2020:
The Superb Discord Thing server
The server has been coming along well, and we're pleased to say that we've gotten some responses to our previous request for volunteers to join the server staff! With a bit of luck we should be able to launch the server before Beta 4 and the devkit so folks will have some time to get comfortable in there and follow along with our final preparations in the A2XT2 channel group.

Sorry for all of this stuff taking so long! We appreciate your patience and understanding, and we wish you all a Happy New Year!