Updated Mushroom tripper- changed a couple obstacles that were questionable.

Updated ON/OFF segment of Burnt mountain tango and another part that requires reflex; more time is given.

Also I know I said I'm going to update my Fort Fire Bros. port but for now if it isn't inserted yet, insert it and use all levels of Burnt Mountain Tango use it (23, 70, 71 and 73).
I'm not a YTPMV'er. My goal is towards learning music and eventually making my own content with what I like (in this case ponies). I'm still studying how music works and this is what I can do so far, so to all the ytpmv'ers out there: Please stop following my videos, cause I'm not interested in making chiptune music with your rules you set up on how to make YTPMV's. Also I'd appreciate if you guys would lay off bronies in the comment section, cause these are made for them and not for people who
Top

morsel/morceau wrote:I thought of an easy way to fix the hitbox issue (ducking & small balloon mario pose & all power-ups filtered to fire to give an unambiguous powered-up state), so the message about ducking can be discarded. I had already revised the end of the level to avoid things looking weird with all the fireballs, and decided to keep it because I liked it better; I resisited the temptation to make the earlier part of the level harder even although the smaller hitbox makes it much more lenient. And it should be clearer now at the part with the giant mincer spikes that star (or hurt) invincibility should be required.

I liked your graphical solution. By the way, there are some weird interaction between pipe and balloon physics. 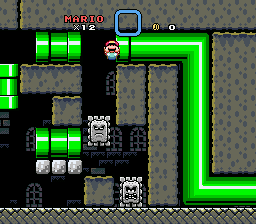 When you press up and right, you will get stuck like this. 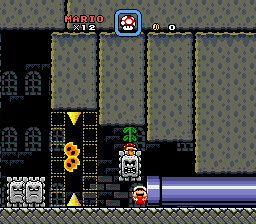 Re-entering the pipe isn't sometimes done quickly. You have to already press right while moving from right to left through the pipe(and keep pressing down, iirc).
I already tried to modify this finicky pipe physics. Now it seems to work pretty well. I will apply the modification unless you don't want. It will be applied to only sublevel B3 just in case.
Top

Oh, I never noticed this thread. I just submitted my level to WorldPeace but while I'm here:

THE FLOATING ISLANDS THAT FLOAT A LOT
Top

My third level is done. Its a short and silly one. I did my best to make it extremely easy if you handle it properly, but it'll kick your butt if you aren't careful. A good fit for a secret World 1 stage, I think!

Used some custom level music this time, but I didn't know how to send it to you. So I tossed the text file into the zip by itself. It took up slot 69 I think.

I do have to know: How likely are players to hit the Yellow Switch before they get here? If this level can be reached before that, we're all golden. But if its an assured thing that they'll press it before getting to this level I might need to adjust the yellow switch blocks I've placed.
Top

Isrieri wrote:I do have to know: How likely are players to hit the Yellow Switch before they get here? If this level can be reached before that, we're all golden. But if its an assured thing that they'll press it before getting to this level I might need to adjust the yellow switch blocks I've placed.

The reason of this plan is because your level leads to the secret place of world 4. As I promised before, I will make your level possible only when the condition is satisfied, like:

worldpeace125 wrote:This level unlocks the pipe leading to world 4 yoshi's house so the level should not be beat at the early stage.
My request is that the level should include the segment that can be beat only after autumn comes (the season is when shell colors change).
Any generic level is welcome too (a naive above-mentioned segment may be added into your level).

here's an example filter that could be at the very beginning of your level (in this method, you might want to decide if players are allowed to keep the yoshi.. Also another midpoint right after passing the filter would be good)

Don't worry about the number of message boxes. It's possible to have more than two...


When autumn comes, the shell changes. 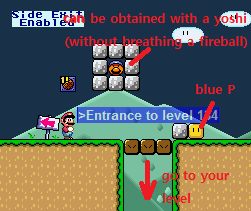 Of course, a cape can easily break this example and it should be handled.
By the way, you need to send texts for the message box as they aren't included in the level files(.mwl)
Top

By the way, you need to send texts for the message box as they aren't included in the level files(.mwl)

My bad. I'll leave the season filtering to you. I can't think of how to make one that wouldn't be tedious or annoying with vanilla stuff.

I did take out those yellow switch blocks and added the message files though. So here's version 2.
Top

I updated 'The Dumbest Cavern.'

Isrieri wrote:I'll leave the season filtering to you. I can't think of how to make one that wouldn't be tedious or annoying with vanilla stuff.

Alright, this is how the filter works.
1. Spring 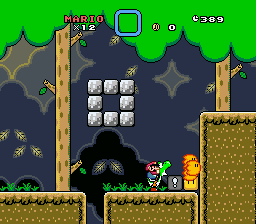 I'm not good at writing. This message is my best attempt ;-;
If it doesn't work quite well, feel free to send me an alternative text.
The question block contains a free yoshi for the puzzle. So I added a yoshi filter consisting of floating lightnings, which are completely vanilla interestingly: lightnings affects you(makes yoshi run away) only when you ride a yoshi. As a result, you cannot bring the yoshi to the map.

The red shell can't do anything. 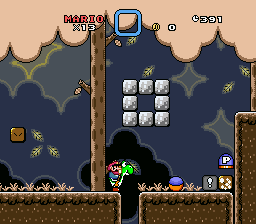 An extra midpoint right after the filter. It allows you to skip this part once you pass it. It also makes Mario big so he cannot enter the door with a yoshi.
Your level is behind the door. 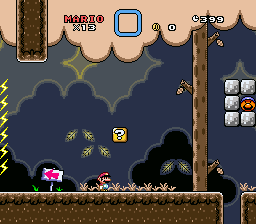 The shell is changed into a mask like the original. The palette changes (which isn't actually vanilla). Also the speaker disappears due to the context. 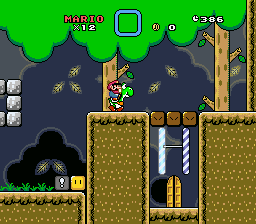 A blue pow (the grey ! block is a "sprite only" block, which is introduced in a few levels in this hack)
Top

I noticed you can get past the filter at the side of the screen in two ways:
-by dropping yoshi near the lighting, then mounting and leaving quickly.
-by flying underneath using the blue shell.

Also, you can avoid the midpoint and take yoshi into the cave (doesn't seem to affect anything, apart from allowing alternative access to the bonus pipe).
dont wanna jihad no more
Top

Minor updates to most of my levels based on Ryrir's reviews.

I was thinking I'll probably need to revise my real final segment as well, but I'm still waiting for the multiperson level reviews. I haven't had the chance to play the other real final segments in quite a while, so I might do that and try and gauge the general difficulty before changing anything.

Edit: after playing some of the other segments, the difficulty of mine seems okay after all.

Remade the level. If you can I would like a review if it is too hard and such.
Top

I decided to take advantage of the extra midpoints to extend the secret exit of House of the Holy (just to incorporate some random ideas). The level message should be changed from "cancel the midpoint" to "cancel this midpoint".

EDIT: just noticed screen 0F uses the wrong screen exit - should be same as the others.
dont wanna jihad no more
Top

Changed the height of some spikes, and made the springboard easier to get (if you throw and catch the same block repeatedly, this part is not too hard but it may be hard to see this with the pressure on), and the boss boo is slightly harder as you will not now be sent back to the beginning

Koopster
judge of u
Posts: 191
Joined: 5 years ago
Location: is there anybody in there?

Just finished packing up the level I claimed. Feedback and whatnot is very welcome since this still wasn't playtested by anyone but myself! I hope I got the difficulty right. Enjoy!

Made it impossible to get trapped forever in level E1. Thanks to morsel for pointing this out!

I apologise for updating this again. Remembering some discussion from the 24 hour big boo contest, I thought being unable to fail at the boss was a bit stupid (ignoring that you could kill yourself with the turn block). Maybe there should be a message explaining the situation (but the mist!) or the status bar could have something like INVERSED FIGHT or KEEP BOO SAFE! somewhere, also the hit point indication may not be clear enough (?).
dont wanna jihad no more
Top

morsel/morceau wrote:Maybe there should be a message explaining the situation (but the mist!) or the status bar could have something like INVERSED FIGHT or KEEP BOO SAFE! somewhere, also the hit point indication may not be clear enough (?). 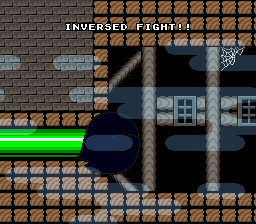 It blinks 3 times and returns to the normal status bar.
Also I forgot to say I already died several times at screen 03(the grey platform section) and I learned how to deal with it before I started recording the movie. Just saying because you made the first section easier.
Top

I think that's clear enough of an indication. Thanks!

I am going to look over all my levels to see if anything needs fixing so I'll bear the last thing in mind.
dont wanna jihad no more
Top

Please release the hack quickly so I won't be tempted to revise anything ever again.
manychangedthings.zip
dont wanna jihad no more
Top

This took more time to start than finish... Yeeks. Level E is in it's finished skeleton now, and more updates are expected after feedback. Some other levels of mine will be updated within' time as well. Anyway, screens below. 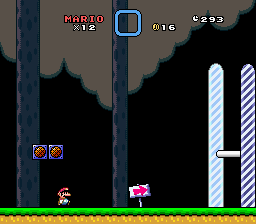 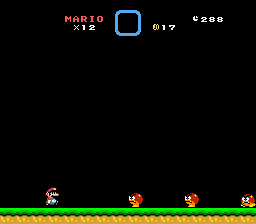 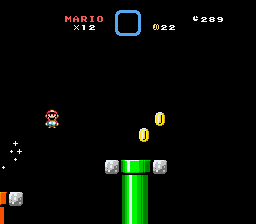 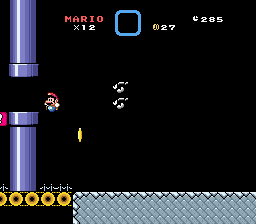 My YouTube channel - P-Switch... - 100 Rooms of Enemies: The Nightmare Edition
Links above if you want to check 'em out... or not, since these are overlooked.
Top
Post Reply
146 posts