Job V 7, as I should have written

Yet man is born unto trouble, as the sparks fly upward. 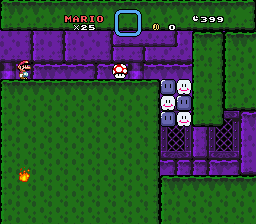 This is my speculative level. It is rather short (50 TIME per half). Obviously I will need to claim things properly later. Enter the level called RNG Nice Ice Adventure(you start on it).

Absolutely amazing gimmick, and the level is pretty great too. SMV below, uses snes9x 1.51
https://cdn.discordapp.com/attachments/ ... ob5vii.smv

This part can be cheesed; you can jump to the ledge without using the grey platform. Idol said that this particular part caught her off guard, and possibly should be made more obvious. "wasnt a big fan of this jump cos i feel like the nature of this level has the player kinda constantly moving"

I also felt like the falling grey platform thingy was used a little too many times. Something different could possibly be used there. I know if you included more, it might become more difficult than you want, so maybe a second midpoint and a 1-up checkpoint?

Lastly, I think starting off the level with a grey platform jump would be better than using an open pit of spikes.
Top

Thanks for playing it. I'll revise it later -- that is roll out the blue warning coins and fiddle with the grey platforms (I don't want to make it longer though).

I think the second half would be better with instant death spikes and the retry prompt, but as you didn't say anything about it I'll leave it alone for now.
dont wanna jihad no more
Top

morsel/morceau wrote: ↑ Thanks for playing it. I'll revise it later -- that is roll out the blue warning coins and fiddle with the grey platforms (I don't want to make it longer though).

I think the second half would be better with instant death spikes and the retry prompt, but as you didn't say anything about it I'll leave it alone for now.

Oh nice! And well personally, I would say no, because I was able to get through the second half after getting hit by the spikes a couple times. The second time I beat it, I accidentally hit a spike, but was able to keep going. I have to admit though, once the time limit got to 99 and the hurry up music played, I started playing sloppy. It is feasible to have time run out by accident, and I think 1 single muncher in the bottom right corner would allow the player to exit the level easily if the time is getting close to running out.

I like the gimmick but design feels rather unpolished? the way it was introduced is good, but right away the first obstacle you have to do with it is a little awkward. the grey platform jump seems almost like a better way to start it off. also I can sometimes just jump up the ledge instead of spinjumping on the fire (which is more inconvenient)

backseat designer here, but I could suggest something like this

if not, with a grey platform instead possibly
if you're going to use the platform setup, you should fix being able to skip it (or make it harder to get up with limited ground space).

you might wanna give the platform setup a more presentable look (in my mind, making it less condensed with the other obstacles (more space)) so it clicks in faster that it's a setup that you must spinjump on (besides the obvious giant coin A). it should be tweaked around so you're nearly guaranteed to be able to spinjump on the incoming fire (despite how you approached landing on the grey platform (small jump or big jump)).
the hidden spike is obviously malicious and intended to screw you over (you could probably avoid it by spinjumping a weird awkward way from it by accident at least). so if you want a change of heart, you could hint it like this possibly

I can't think of anything in the first half besides that nearly everything else isn't that much of a threat
it's more hard in the beginning than near the midpoint
second half is cool. can't help but feel that it should have had more than just spike dodging.
also had a weird time trying to get used to it, unsure why..
it's possible the speed of the rising flames kinda limit what you could design around with without making play it like ass.(edited)
the boss, uh..
wished it was in a custom arena, because I wasn't expecting to have the fire being still thrown at me, especially when I'm so close to the bottom of the screen (start me higher somehow).

alternatively, the fire could come from the top. I'd see that work way better (and might be harder too, but at least it's more predictable).
though the gimmick references sparks that fly upward, so you will probably not do that

I'd seen this but thanks for posting anyway. I agree with most of this feedback. The updated level is in the first post.

Changes and remarks.
-no time limit (I don't think you can get stuck anywhere)
-camera placed further up in second half (the alternative use of this concept would be (eg) 2 flames + sprite obstacles (I only have 10 sprites) but I think it would amount to much the same thing in the end)
-first half should be better made (it's harder now and there are no skips -- it was a bit loose in the first place because I didn't want it too hard and specific)
-the spikes have blue coin warnings (if this is controversial you can just make the one spike perma-visable like the others).
-reznor bug fixed (where he freezes in the middle of the screen) -- I'd prefer the original boss arena since you never see reznor at home these days.
-the level name now corresponds to actual naming conventions instead of the one I made up (ie now the chapter has the roman numeral). Having the sparks move downwards would be blasphemous, contradicting as it would the word of God.
dont wanna jihad no more
Top
Post Reply
5 posts • Page 1 of 1