The Mosts are closed!! Who will win? Find out eventually! I HOPE I WIN!!!

[01B] Green Palace of the Alchemist

[01B] Green Palace of the Alchemist

A simple bonus level :)
Inspired by recent buoyancy levels (morsel, lazy) and Matterhorn (lazy's VLDC 9 entry). If its difficulty is too easy or hard for the location of green switch, you may change the color of the switch in this level (also the level name).


EDIT: page1A.map16 in this attachment is the latest one. The other map16 file (in the nitroglycerin resources) is outdated.
Quick update was done. In the new version, you have to collect 30 coins to unlock the star block. So the bowser statue becomes actually an obstacle.

Double Edit: after having this tested by a couple of players, I realized that the aim of this level was too ambiguous (between puzzle and bonus) and neither of the goal were achieved. The level turned out just confusing.
I'm gonna reconstruct the structure(1st half: bonus & introduce the gimmick. 2nd half: puzzle), add more puzzle rooms, and make bonus rooms less annoying.
Last edited by worldpeace125 5 years ago, edited 1 time in total.
Top 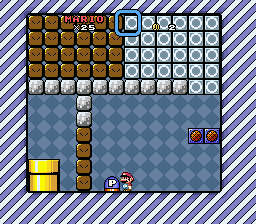 I scrapped the original concept about shooting fireballs. Instead, I focused on metal conversion(golden or brass coins into silver coins) which would be more relevant with the level's name. Basically, all parts were created from scratch.

I believe this new level will be free from some problems in the past level like the lack of gimmick explanation, and other ambiguity problems. The goal is clear now: with given switches, you are supposed to solve the puzzle of collecting all coins.
About the structure, you can explore next rooms even if you don't solve the current room. Some kind of checkpoint system was implemented to avoid repetition. To espace the level, use the screen exit in the filter room (you cannot die in this level).

The puzzles can be tricky now. I expect the remaining problems to be one of these:
- difficulty
- writing, grammer, etc.

Made one puzzle which was possibly confusing more clear. Thanks to Lazy and lolyoshi for giving feedbacks.

Thanks aterraformer, Flan, and ft029 for giving inputs.

Changes:
- added some useful info in the HUD
- toned down the difficulty spike with an implicit hint
- replaced the flower room with a new one introducing the concept
- prevented a small break which may happen randomly but its probability is kinda high.

To do:
- Add no yoshi intro to prevent the used switch from being swallowed. This can be done when the no yoshi intro patch is applied to the base rom.

I wouldn't exactly call "I don't get it" feedback lol

Applied GlitchMr and ft029's feedback. Hopefully this is the last version, and I'll wait the no yoshi intro patch added to the base ROM.