The Mosts are closed!! Who will win? Find out eventually! I HOPE I WIN!!! 
Warning: contains puzzles, semi-obscure mechanic abuse, and a glitch that only works half the time :) (keep trying if nothing happens when dumping yoshi in a pit)

I wanted to make one of those warehouse levels with an obscure exit because those can be kinda fun to find.

There's also a blue switch you can press at yoshi's house, which might be helpful.
Feedback would be appreciated, as I'm sure I'm completely bonkers.

Edit: Updated! Now the yoshi colorizer should work 100% of the time thanks to levelasm.

Alright so I played this for 15 minutes and I

got the key with yellow yoshi

after 5 minutes, however I have no idea how to

get that p-switch on the right (yeah I looked that one up but doesn't help me anyways).

So far I'm loving it, alone the generator itself is brilliant (is that vanilla? if yes, I have NO idea how you did that). I'd like to know how to proceed further though.
Top

A useful thing to know for that puzzle is that

keys can interact with blocks while on yoshi's tongue

. I think I'll add a block next to where you first grab the key, so you can see it happen at least once. It might still be too subtle though.

And yep, the yoshi coloring is vanilla, though without a little bit of asm it only works about half the time!

keys interact with blocks while on the tongue

, however I still didn't manage to

... Hmm I guess I'll try again when I am back home. Btw this level's exit is crazy already! This should definitely be in one of the later worlds (since you can get special yoshis too).
Top

the silver p-switch is still necessary, as the munchers are replaced with coins.

I cannot come up with the way to get rid of the shell defending the turn block without losing the other shell. I'll try more, but one question for pruning some of conjectures: does the solution require pixel-perfect precision (block dup, etc)? I guess it doesn't, but want to make sure just in case.

Huh, I'm very curious to know what your solution is! My method still uses it.

Wait, I just found a way. Maybe swapping the key block with another p switch block will end up with a more intended solution?

As for the shell, there is no need for pixel precision. I tried to design the level in such a way that everything would be relatively easy to pull off once the solution was known.

edit: here's an update for the midpoint room that will probably make things simultaneously more obvious and more confusing

Finally beat this level! Here's the last scene of the puzzle, to let you check if my solution is what you intended (gonna record a video soon).

I feel like I kinda cheesed the level. My solution relies on some luck, and it's time consuming and very hard to pull off. 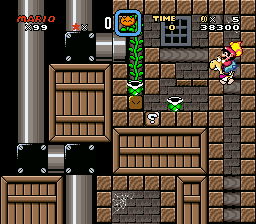 What an amazing level! It's an A+++ puzzle in the league of lechuck. I love the

I am pretty sure I beat it as you intended (

you need flower and cape to get in the final pipe, right?

. I think you shouldn't have to kill yourself if you go for the

(maybe it isn't necessary but I can't see it - Edit:

morsel/morceau wrote:I am pretty sure I beat it as you intended (

you need flower and cape to get in the final pipe, right?

Wow, after reading the spoiler and realizing the solution, I see this level is actually super clever!

I would've never thought of the fireball clipping(?) myself though. Other than that,

I liked every single component and how well the puzzle is organized ;)

My solution was to bypass the defending shell. Starting from the inside of the pipe, my shell was sent upward(?) L/R or pausing was used, to avoid making the shell trapped, which is very luck-based (I believe you already tried preventing this).

for the end of the first half as well.

The easier way of getting shoved into the wall is not double grabbing but kicking both switches forward against the wall; having a cape obviously often forces you to face the opposite direction when hitting Y and switching to the flower prevents that.

If this was intended it adds to the symmetry of the level very neatly.

And I remembered the phrasing of the first message block lead me to continually try by hitting both blocks and not attempting combinations. If the message is deliberately cryptic this is fine but otherwise you should think about recasting the message.
dont wanna jihad no more
Top

Very creative solutions! Morsel found the intended solution for the second half, nice job! I'd still like to see a recording of your solution worldpeace, as it seems quite insane.

L/R scrolling (or pausing) used to be required to push the shell through a wall (there used to be blocks on either side of the coins), but it seemed a bit too luck based (and maybe too obscure?). P switch recycling was also sometimes necessary because of this. That said, I'm not sure how you managed to move the shell upwards using this technique?

Looks like no one has found the intended solution for the first half yet. My solution:

I think the open ended-ness of that puzzle is pretty fair though, and results in a variety of interesting solutions!

I agree about the message at the entrance to the level. I'll try to come up with something a bit clearer.

I'm glad you guys seemed to enjoy this level! Though unfortunately the level is still rejected since aterraformer wasn't able to beat it (yet).

My solution wrapped by a spoiler tag:

My solution exploits L/R buttons [ispoiler]when the shell is in the certain row[/ispoiler], and due to that it relies on luck. I guess the probability of items moving towards left or right is 50%? and I feel like playing some kind of gamble here. I used a duplicated P-switch to see which direction the shell moved for each L/R scroll.
[attachment=0]007 v1.02.zip[/attachment]
Actually this solution is stably reproducible, but not a thing that can be logically found.
Also I should mentioned that [ispoiler]the duck flying with a winged yoshi[/ispoiler] wasn't included in my original solution. I discovered it after I heard a [ispoiler]fire flower[/ispoiler] is actually needed.

About the accepting issue of hard puzzles, I'd suggest make such levels totally optional; no exits will be unlocked from them and thus not necessary to solve them to achieve 100%. However, their awards can be more interesting. For this level, my suggestion is an idea of "upgrade your storage house as much as your ability reaches". In the house, there would be several puzzles. When you beat one puzzle in the current floor, you can access the upper floor having the next midpoint. (I may just copy paste the necessary codes from JUMP for multiple midpoints. If you are not fond of multiple midpoints, just some simple levelasm codes are enough.)
Currently there are two puzzles so, 1F: powerups and yoshis, 2F:

To make more audiences find this level interesting, you could extend the level(more floors) and add puzzles of various difficulties. However this would require substantial amount of work especially when you have to think of new puzzles fitting the theme, and I appreciate the current level already. Maybe, this upgrade thing can be used next time. Just a random idea :)

Isocitration wrote:Looks like no one has found the intended solution for the first half yet. My solution:

I think the open ended-ness of that puzzle is pretty fair though, and results in a variety of interesting solutions!

At first I assumed this is the solution I did (I didn't want to comment until I would do the second part of a level, and I didn't want to put videos, as they were a trainwreck not worth of being watched (no spoilers in this video, it's a trainwreck as you can see)), but apparently not.

Uploaded a video of my solution to the first half - https://youtu.be/ZG75OiPeH7Q (SPOILER WARNING) either way. This can be done in 1.02 as well,

but it's somewhat tricker, because you cannot hold Down on a P-Switch

I figured death room quite easily actually, as I played Super Puzzle World 3, and it had a similar puzzle.

Also, I should have realized the reason you provide glitch gold Yoshi which behaves like blue Yoshi is that you need two powerups, obviously, and blue hurts (as opposed to gold), and I even checked the game code, and only red Yoshi can fire, as opposed to two other Yoshi powers that are read from a table.

Another method for the first half (I should have known that turn block set up wasn't a red herring, but a different sort of