by Holy
Hey y'all-- any of you messed around with this before?

It's called Bitsy, and it basically lets you make a little world where the player can walk around and talk to things. It's very limited but it's also VERY easy to use and you can get some fun stuff going with it. 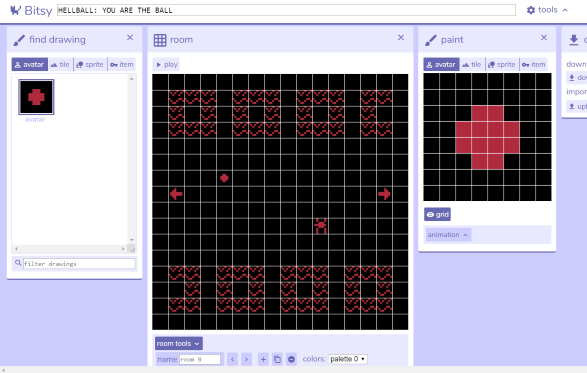 Check it out here: https://ledoux.itch.io/bitsy

I've made a few games which I'm going to link below. I've also played some really cool games that use the engine; I'll try to find those again and link them in here later... but yeah, bitsy. It's cool. Share stuff in this thread if you make anything or know of any cool bitsy games!

Be An Ant And Eat Six Scrumptious Pastries
The first game I made. You are an ant and you get to eat six scrumptious pastries

Another Titanic
This one I'm not too happy with. I used a set of playing cards to "generate" the game via random draw, to mixed results

HELLBALL: YOU ARE THE BALL
I literally just made this five minutes ago and was like "hey, this has talkhaus vibes, I wanna tell em"
You are a ball in hell, and demons kick you around for points. Or something like that

by Piesonscreations
Oh man, I really dug the telescope one, so much so that I wanted to give the thing a try! That one felt like it had the most focus on a single idea, and it felt great in the end.

Here's my project if you want to give it a try!
Oh, What a World to be a Slime in!
https://piesonscreations.itch.io/ohwhat ... beaslimein

by Holy
That was really fun! The fact that you have to

sit there for a bit when you eat a burger

was really cool. Love the colors and art too. I haven't messed around with screen transitions yet and those were neat, I should try those out.

I've found quite a few good bitsy games on the Glorious Trainwrecks website, which is a cool website that has a lot of neat janky games on it.
Here's two:
game where you are a bug:
https://www.glorioustrainwrecks.com/node/11579

and here's one made by sylvie of cat planet fame:
https://www.glorioustrainwrecks.com/node/11481

by Piesonscreations
Thank you! I though of doing that since that was the only way I could think of punishing the player for not doing what I wanted them to at the time (other than teleporting them back to the start.)

Sylvie's game was very interesting, although were it not for the fact that I know what kind of designs they make, I probably wouldn't have thought to dig in deeper to find extra stuff.
All times are UTC
Page 1 of 1
Powered by phpBB® Forum Software © phpBB Limited
https://www.phpbb.com/