Damn, it feels good to be a gangster.
Locked
38 posts

I posted about a new mafia game and several people were interested, so let's start the new year with a new game.

The basic premise of mafia is this: there are two teams, the town and the mafia. Obviously these two cannot live side by side, so the ultimate goal of each team is to destroy the other team. No townsperson knows who is mafia; therefore, much of the game is spent trying to weed out mafia members. To aid in this search, the town has several specialized roles. Among these are the cop, who investigates people to learn what team they are on, and the doctor, who can save people from being killed by the mafia. Both the town and the mafia have specialized roles, and the doctor and cop are not the only ones, but for the purpose of this intro I will not go into detail about each role.

The game is divided into two parts: night and day. At night, the mafia decides on who to kill and any other actions that may be available to them. In addition, any "power roles" from the town (e.g. cop, doctor) will send their actions to the host. Once all actions have been sent out, night ends. In the daytime, all players participate in a vote. They must decide on whom to lynch that day. The purpose of this is to lynch a mafia member, but as townspeople cannot tell who is mafia, it often ends with the lynching of one of their own. Daytime ends after the lynch.

The game continues in this way until either the mafia outnumbers the town, or when all the mafia have died.

1. You do not talk about mafia outside of the thread. That means no theorizing, no asking "what's your role?", no nothing. If you are part of a team, like the mafia, you are allowed to discuss with them however and whenever you like. If you have this really great strategy planned out and you need to tell someone something to make it work, but no one else can see it, you'll have to send me a PM and I'll relay it. Of course, you can still talk about things like how great the game or the host is in IRC.

2. You cannot post in the thread during the night, unless you just died and you'd like to make a last statement. Please do not include results of investigations such as "I investigated X and he was Y", or who your partners are, in your last statement. Basically, only really, really general stuff (or just something dumb), and nothing that can really change how the game is going. If you had something to say, you should've said it while you were alive.

3. The host is always right, and should not be doubted. The host never makes any mistakes (except when he does).

4. During the night, you must send me, the host, what you would like to do as a night action in a PM. If you don't choose a target in 48 hours, you will probably be killed and removed from play. Don't do this. If you have to go for a few days and can't play, PM me and we'll work something out.

5. During the day, everyone votes on who should be lynched. Once a majority is reached, or everyone has either voted or resigned their vote, a 24 hour countdown starts. Once it ends, the person with the most votes is lynched.

6. Under no circumstances should you quote a PM from the host, or forge one for that matter. If you want to claim that you received a report, provide no other evidence than your own credibility.

7. The game ends when all mafia are dead, or when the mafia outnumbers the town.
Signups - Bring Sillyman

Signup lasts 36 hours from when it was posted. A minimum of 18 people for this game is expected. If more people join, I'll assign more of the roles below.

Some tentative roles I have in mind:

Wins if all mafia members are dead.

Normal Kop (1): Visits a person at night and sees if that person is innocent (town), guilty (mafia), or neutral.

Inverted Kop (1): Same as Normal Kop, except sees town as guilty and mafia as innocent.

Millager (1): Revealed as normal Villager to self, and to the players when killed. Both Kops see this person as guilty. This person can survive one night attack (does not apply to day lynch), dies after a second attack.

Traxer (1): Visits a person at night and sees who that person visited that night.

Whatcher (1+): Visits a person at night and sees who visited that person that night (besides the Whatcher).

Orako (1+): Chooses a person at night. The role of the most recently chosen person is revealed to the players if the Orako dies.

Wins if mafia count matches or outnumbers town count. Meets in PM each night to discuss plans. A mafia member can go attack a person each night. The attacker is selected at random if not chosen.

Stalk Herb (1): Visits a person at night and learns the role of that person.

Janidor (1+): Can choose to hide whoever the mafia chooses to kill that night, so that the killed person's role is not revealed to the players. Can activate this power only once per game.

Roalblocker (1): Visits a person at night and stops that person from doing whatever that night. This person cannot be the person mafia attacks that night.

Vanilla Villaina (1+): Can participate in mafia meetings and be the attacker for the night. If there is a dead non-Vanilla mafia, a Vanilla Villaina can choose to assume the role of that mafia, taking effect the next day (cannot target a Janidor whose power is already used up).

Confused (1+): Chooses a side, so that the Confused wins or loses together with that side. Can choose to stay or switch sides each night. Can't switch once dead.

Annoyed (1): Chooses a person at the beginning of the game (random if not chosen). If that person manages to die before the Annoyed dies, the Annoyed wins with the winning side. Otherwise, the Annoyed loses.

If a town or neutral person dies night 1 or day 1, the first such to die turns into the Specterr. Being dead, the Specterr does not participate in day discussions/lynches and cannot be targeted by power roles that target alive players.

Specterr (1): Chooses a person at night to haunt. If the Specterr haunts the same person in two consecutive nights, that person dies. This does not count as a mafia attack.
Last edited by ano0maly on 28 Jan 2014, 22:02, edited 26 times in total.

Hey mafia is fun and I've never played it with talkhaus so I'll jump in sign me up. Be warned though, I'm super good at this game, you don't even know.
Top

pholtos
Loves adorable things.
Posts: 1524
Joined: 11 years ago
Location: One of the States in the Center of the U.S.

I do LPs, check them out if you'd like.

The Destroyer of Worlds
I am become death
Posts: 1487
Joined: 7 years ago

Postby The Destroyer of Worlds » 6 years ago

raocow wrote:Dang it Oyster this level is not called Peregrine Penguin and the Soft Bon-Bon, it clearly says Ghost House with a Ghost in It!

I volunteer
Warning: Opinions expressed by alex2 or others in this post do not necessarily reflect the views, opinions, or position of alex2 himself on the matter(s) being discussed therein.

This setup looks like one of the ones from EM, but I can't remember its name. Unfortunately, I'm pretty busy with school stuff so I can't join.
Posting and you, everything you should know before posting

TLs4 wrote:I WILL finish MATH2 - there will be WINNERS, there WILL be prizes, and I WILL be returning to LPing; sooner than later at that but tat is NOT the point of this discussion.

I didn't base it directly on an EpicMafia game, but rather, on several previous mafia setups on talkhaus.

Let's see... Last time I played Mafia, I got the usernames mixed up and accidentally killed my fellow Mafia members instead of the Villagers.... Maybe I'll do better this time.

(Yes, I'm playing.)
Warning: It is now too late to not read my signature.

lukaramu
not lukaramu
Posts: 0
Joined: 7 years ago
First name: not lukaramu
Location: the place where i live

jayScribble
FEEL THE FORCE
Posts: 429
Joined: 7 years ago
Pronouns: it, they, that
Location: Over there

I wish to participate.
Top

Does anyone remember exactly which games were lost in the talkhaustrophe? Names & hosts please
Top

Wareng wrote:Does anyone remember exactly which games were lost in the talkhaustrophe? Names & hosts please

Winning Party
Nazis
Oh, and, as a little extra... Here's the deciding vote from that last game as a screencap: 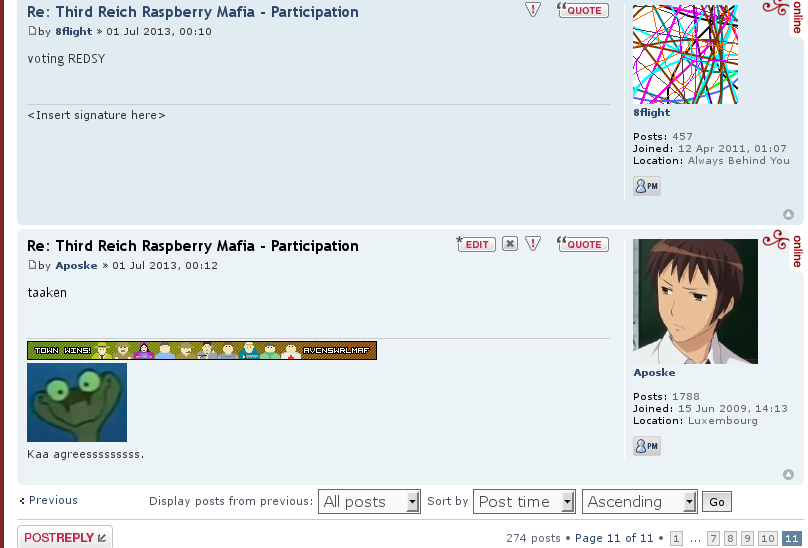 Signups will close 24 hours from now, with a minimum of 18 people. I remember people that showed interest and I want to give them a chance to consider.

Ashan
The world has become a place
Posts: 2427
Joined: 10 years ago
Location: Canada

Alright sure, sign me up. I have no idea how this will work.