I'll get you the combos and scripts loaded up some time today.

In Screen Data > S.Data 1, there's a pulldown to toggle the effect of the Lens for that screen. For visible/invisible or vice-versa, set that menu and use layers to achieve the desired effect. The "Normal" effect of the Lens is to show where to bomb/burn/etc. to set off secrets, so visibility has to achieved through that pulldown.

As for solidity changing when the Lens is used, that'll require an Action script for the Lens that tags on that additional effect. I'll look into implementing that.
Top

It's not "Solidity changing when the lens is in use" so much as "The floor is fake and the lens should reflect the lack of solidity". Someone who has the layout memorized should be able to travel through Promin Cliffs without using the Hipster Glasses at all. I'll have the boss be visible only to the Lens, that doesn't look like it takes too much finagling.
I do streams sometimes
SnoruntPyro played my MaGLX2 level

Try putting pits/holes and the real floor on layer 0, then cover up every pit tile you want hidden with a floor tile on layer 1. Then, use Hide layer 1 for that screen's Lens effect, which will make the fake floor tiles "disappear" when the Lens is used. The pit script should make Link fall if there's a pit under him, regardless of what's visible on the screen.
Top

The .qst I've just added is a copy of yours, with all scripts and combos and tiles added in their proper slots. I positioned an FFC with the ladder script on screen 2:43; just copy and paste it onto every screen with a ladder, changing the graphic however you like so it blends in. New ladder combos just need to be set up like combo 768. Since you have all the scripts, you also have access to sideview moving platforms, sideview buttons, and my sideview custom enemies (Boo + Podoboo). FFCs also have a flag that makes them only visible with the Lens. If you want to use any of that and have questions, or you want anything at all in sideview, let me know.
Top

Well the good news is that I'm back in production.

The bad news is I have no idea how to do what I want to do. I need one of you ZC experts to coach me on precisely how to hide/show layers while the hipster glasses are in use. Either IRC or Skype is fine.

EDIT: And of course the instructions are right up there. Now to figure out step zero, which is creating the layers.
I do streams sometimes
SnoruntPyro played my MaGLX2 level

raekuul wrote:Well the good news is that I'm back in production.

The bad news is I have no idea how to do what I want to do. I need one of you ZC experts to coach me on precisely how to hide/show layers while the hipster glasses are in use. Either IRC or Skype is fine.

EDIT: And of course the instructions are right up there. Now to figure out step zero, which is creating the layers.

A layer is a screen that is linked to another screen. To set up a layer, go to Screen > Layers in the top menu, or press F12. You can use the Auto option, which will set up e.g. Layer 1 for use on every screen of the current Map. Auto will ask you for a Map to use for that layer, and will automatically set up the corresponding screens of that Map as layers for the current Map. So when using Auto, make sure to choose an empty map.

Instead of using Auto, you can also set up layers on a per-screen basis. In Screen > Layers again, just fill in a map number and the number of a screen on that map, probably an empty one. If using this method, feel free to use screens on the same map as your dungeon screen, as long as you won't be using them for another purpose later.

When you have a Layer set up, you can switch to that Layer on the dungeon screen itself using the buttons at the bottom of the draw panel, and draw on that screen exactly how it will appear in-game. To set up that screen where the floors are fall-through, for example, draw the floor as it really is on layer 0. Then you'll want to use layer 5 or 6 to cover the holes with floor tiles that will look solid but aren't. And if the holes will actually be pits (the kind that hurt you and warp you back to the beginning of the room) you'll also need to place the pits on layer 0.

Now, layer 6 is Overhead, meaning the fake floor tiles will be drawn in front of Link when he falls through them. If you would rather have the fake floor tiles be drawn behind Link, then the easiest solution would be to create an identical looking floor tile that isn't solid, and place it on layer 1. Then, in Screen Data use the Lens effect: Hide Layer 1. Alternatively, you could place floor tiles on layer 2, then use Layer 2 is Background in Screen Data, and use the Lens effect: Hide Layer 2. I believe Background combos are ignored for solidity (might be wrong).

I'm not dead; I just haven't finished building the basic layout yet.

I intend to finish putting the basic layout by Tuesday at the latest - but that's not saying anything about layers. I'd probably ask one of you to coach me through it over skype or something once I get to that point. Enemy populations are going to be a thing that I need to consider carefully. I don't want to over populate on bats simply because the 2nd half of the dungeon (as I envision it) has a lot of lose-progress pits.
I do streams sometimes
SnoruntPyro played my MaGLX2 level

I finished putting in the basic layout; I've also started on the layer masks. It's not as difficult as I thought it'd be but I've run into an interesting issue.

Just took a brief look -- the script isn't yet written to look for ladders on layer 2, so that's probably the cause. I'll write that in by this evening.

EDIT: Ended up caught up on something else, will get this done tomorrow.
Top

I've updated the Ladder script now as well as bringing over the latest script buffer from the master quest. Ladders on Layer 2 should work just like other ladders now, whether or not they're visible. I'll add Layer 1 functionality as well, but I think you've only got ladders on layers 0 and 2, so for now it should be good.
Top

I can still make use of the ladder script and I could still use some of your level in the new one if you want.
Top

I started making a custom palette and adding tiles and this is the theme I came up with. I tried to make it a little more pink/psychic but didn't like how it looked. It's more dark and purple than light and pink, but I still like how it turned out. What about you guys, how do you like it? 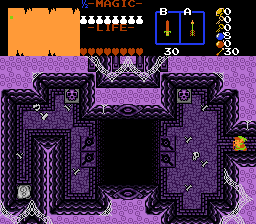 jayScribble
FEEL THE FORCE
Posts: 431
Joined: 7 years ago
Pronouns: it, they, that
Location: Over there

It looks good. Definitely looking forward to what you'll do for this dungeon.

jayScribble wrote: ↑ It looks good. Definitely looking forward to what you'll do for this dungeon.

I have a lot in mind. One thing I like is a step switch that is actually a spike. Or a spike thats actually a step switch when you use the lens, among other ideas. Or a room that looks empty but when the lens is used, all the combo are shown. Or a puzzle so where you NEED both the lens off and on to complete. Lots of options here.
Top

raekuul wrote: ↑ I have no objections

Was the sideview level in that file your version of the level? I could probably still implement it into the new level.
Top

yeah, the sideview segment was what I had made.
I do streams sometimes
SnoruntPyro played my MaGLX2 level

raekuul wrote: ↑ yeah, the sideview segment was what I had made.

Alright. Would you like me to use it? I could do both sideview and top down with both of our sections. Looks like mostly just an outline but could save some time and help with ideas.
Top