jayScribble
FEEL THE FORCE
Posts: 439
Joined: 9 years ago
Pronouns: it, they, that
Location: Over there

This is something I should have done long ago:

Since we're going to merge everything at some point, we need as least some better communication and sharing on our .qst files, scripts, and everything else. The Dropbox shared folder is the solution for all of this.

This is also to alleviate the problem of what is the latest version on what dungeon by simply replacing the .qst file. However, keep a backup outside the dropbox shared folder, since everyone who has access to it might make some... undesirable decision to it.

Word of note: the "Dungeon Status.txt" will be taking over the AZCT tracking sheet for now.

Finally, can someone make the main quest?

My Overworld 1 demo already has DMaps for the dungeons in 1-screen form with warps to them. They could be easily replaced with the actual dungeons to form the real quest file. Someone will need to figure out the bug that causes the pause menu map to be misaligned with reality though.
Top

I was going to ask how to reproduce the bug, and then I started walking rightwards. :D

It seems to be shifted over to the right four squares from where it should be. Checking out the DMap to see what pause subscreen we're using (Active, New B, whatever that means) then checking out the corresponding graphics reveals this: 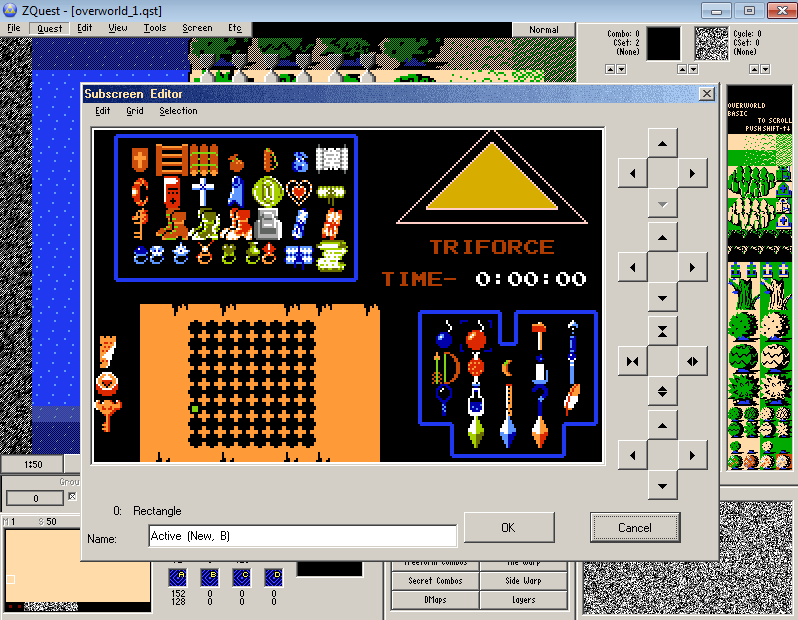 which shows an underlying 8x8 grid of rooms. That's why the Link indicator starts off skewed and eventually moves off the map. Surprisingly enough (or not depending on whether you hate ZC) there seems to be no fix to make this larger than 8x8 -- it's a wacky holdover from dungeons in Zelda 1, since the overworld in that didn't have a map, just a minimap.

Eventually we'll want to do a custom subscreen anyway, so this is not a big loss. There's a possibility we can write a script to display the indicator all the way over, or we can do something funky with graphics to make it look correct even though it isn't. For now, I've done the latter to make an ugly "fix" on the Dropbox version (by editing Active (New, B) to make the actual map invisible with a longer map graphic behind). 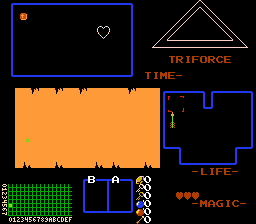 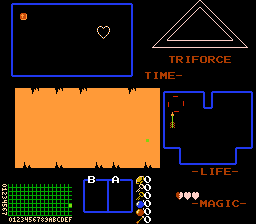 I've given it as much room as possible within the default subscreen, so you can see we'll need to do some fun editing or scripting to make it look good (which I'm happy to do, I love boring menu stuff).