So A Fox, A Rabbit, & Knuckles Walk Into A Bar - Advance 2 - Neon Genesis Evangelion 2

this is the place where lps are being talked about. it's important to talk about games being played on the internet.
Post Reply
4709 posts

There was another Past post up in the top area. It was just to the right of the first checkpoint if you drop down. There are some springs to bounce you right back up top afterwards. To time travel from there, you can start a Super Peel Out run next to the Future post that's by that red spring and just make a couple of jumps over the gaps so you don't lose momentum. Not too tough, although yeah, the Special Stages do get tricky once you hit the fifth one.
Top

Piesonscreations wrote: ↑ Even with how finnicky these special stages seem to get, I can't say I miss either Sonic 1 or 2's special stages. Or 3 for that matter, but that'll come later.

3 (&Knuckles) are both my favorite, at least when it comes to the mainstream Sonic games. A couple years ago when I didn't have internet, I would play a ton of the Blue Sphere stages when I wasn't working or otherwise busy. Played a couple thousand of them. Shame they're not more original, since the patterns very clearly repeat a bunch and it can be super easy to predict what to do.

Still, I've got so good at 3+ that I can easily get Super Sonic before Hydro City's end and Hyper Sonic by Flying Battery's end, though I haven't done the &Knuckles portion in a good while.
ワンワン

Katazuki
Original the Character
Posts: 682
Joined: 6 years ago
Pronouns: that guy
Location: ...Where am I?

3's special stage is a classic, but after playing Mania's...yeah that one beats all of them in my opinion.

Though I will also say 2's special stage formula I think was the best implemented in Sonic Rush. So much more control.

I looked at a map and there's actually a couple of other Past signs in this stage. They're both found in the pit next to the first checkpoint which leads to a small section of the level that you can't get to any other way.
Source: http://info.sonicretro.org/images/9/9a/SCD_map_R41A.png
My curated media content list/blog site
stuff I listen to
Top

Tidal Tempest is honestly one of the few times where I prefer the US soundtrack to the Japanese soundtrack. Gotta love those funky beats. Not a fan of how hard it is to time travel in this level though.
Top

TBH, I got way more than my Blue Sphere fill by 100%ing Mania.

Way too much rotating to also have a rank system of any kind...

If I never see one of those things again, it'll be too soon!

Grounder wrote: ↑ If I never see one of those things again, it'll be too soon! 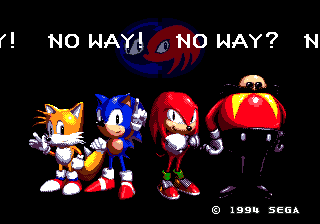 I'll admit I've timed out to this boss when I was young.

Grounder wrote: ↑ If I never see one of those things again, it'll be too soon!

Tidal Tempest is honestly one of the few times where I prefer the US soundtrack to the Japanese soundtrack. Gotta love those funky beats. Not a fan of how hard it is to time travel in this level though.

Dang, I was wondering if someone was going to post this. It's a neat track but I'm too much a purist when it comes to the original soundtrack

That 10 ring monitor has been one of my greatest childhood mysteries.

In addition to the new soundtrack, a more subtle, yet noticeable, change occurred within the pages of the manual. The new female character, Amy Rose, was renamed to Princess Sally, the name of the female lead in the Sonic the Hedgehog cartoon series. In an incredibly well thought out attempt at brand synergy, SOA attempted to trick players into thinking the female characters were one and the same, even modifying the story in the manual to make Sonic and Sally already be on slightly romantic terms.

Though early designs of the Sally character featured a color scheme closer to Amy Rose (and was used for the first fifteen issues of the Archie comic book), somehow, most people were able see past SoA's trickery to recognize that the pink hedgehog sprite had nothing to do with the brown squirrel character, especially with Sonic's behavior in the game towards the girl being only slightly friendlier than pure revulsion.

In the PC release, as well as every other game featuring her, the name was changed back to Amy Rose, the name change now nothing more than a footnote in the history of Sonic's marketing in the west.

If the controller is left untouched for 3 minutes, Sonic will be incensed at the player's lack of action and leap off the level to punish them for it. However, what's not well known about this easter egg is that it's actually possible to escape losing a life from it! Sonic does not completely turn off his hitbox when he leaps off the screen, so a savvy player can position him just above certain objects that make the player move, such as tunnels, thus forcing Sonic to clip into the level geometry and preventing a loss of life.

rao you're just being mean now! what was robotnik even doing to hurt you apart from bullets
convenient noise thread for stress-relief purposes
Top

I think this is the most interesting and unique boss in the game. But note I never beat the game, so I didn't fight them all.

I'm trying to remember what area comes next, I hope it's not

Sebby19 wrote: ↑ I think this is the most interesting and unique boss in the game. But note I never beat the game, so I didn't fight them all.

I'm trying to remember what area comes next, I hope it's not

Quartz Quadrant! It's my favorite zone, too!

# of hits bosses have taken, up to this point:

Let's see how this trend continues!
i've honestly never played a video game in my life

Super Llama
Love is stored in the robot
Posts: 152
Joined: 8 years ago


And one of my favorites on the album

The comedic timing in this episode was impeccable

Piesonscreations wrote: ↑ The comedic timing in this episode was impeccable

Okay, this is the kind of Special Stage experience I remember from my childhood.

A neat detail about the Badnicks in this game is that they slowly decay across the time periods. Both cosmetically AND functionally. An example of this is the mantis like bots in the 2nd world. In the past, all of them have a ranged boomerang like attack with their arms. In the Present, some break down and can't do it, and by the (Bad) Future, all of them can't function anymore.
Last edited by Sebby19 on 18 Jul 2019, 03:47, edited 1 time in total.

Might be a bit telling that the Mania special (not bonus) stages don't actually make you hit the flying saucer.
Why don't you eat me?

I super love the Quartz Quadrant past theme.

tidal tempest is a close second

The UFO hitboxes suck. The framerate and weird, slightly-inaccurate sprite scaling do a great job of misleading you on where exactly you can jump and hit them. Thankfully the remake fixed the all the jank of the special stages so now they're hard for legitimate reasons. Check it, yo.

Users browsing this forum: No registered users and 85 guests