All The S@nics - ℝ - Can YOU Feel The Sunshine?

this is the place where lps are being talked about. it's important to talk about games being played on the internet.
Post Reply
2921 posts

DinnerSonic wrote: ↑ Oh, I found a good example of the CRT effect that was being talked about from Sonic CD's Special Stage. Notice the waterfalls and clouds on the island thingy in the background... that plant has a similar checker effect, so it could end up looking see-through or otherwise funky and neat. Then again, the holes in the plant aren't a 1x1 pixel effect, the gaps are two pixels wide/two pixels tall, so I'm not sure how that might work with the CRT stuff.

Thank you for the example. Now I see what they were trying to go for.
Top

Even while Sonic Team were hard at work on Sonic 2, there was no less a hard fight with Sega of America's marketing team as they tried to create a fitting marketing strategy for Sonic 2. It was on them to ensure that the game's release would matter to John Q. Public, not just hardcore Sega fans. The usual in-store promotions, print and TV ads were all used, but they knew Sonic 2 needed something big to break through to the general public, something even the nightly news would pick up. Thus, they conceived the idea of a global launch date, dubbed 'Sonic Tuesday'. This was something never before seen in the videogame industry, and while the entire marketing team was taken with the idea, the majority of their time post adopting it was spent figuring out this logistical nightmare, made worse by the fact it required them to convince retailers to break long-standing stockroom traditions.

Mystic Cave Zone was originally conceived as a haunted house type level, but ended up morphing into a cave stage as the artists got rolling. It was also referred to as Dust Hill in the various prototypes, but that was only because of a mistake in the level select (something that made its way into several prerelease screenshots) as Mystic Cave Zone's name was only finalized late in development.

i love getting rings with sawedshit

getting rings with sawedshit is the best thing and most amount of fun you can have while proccessing blast
Why don't you eat me?

Wow, that was an incredible run at the 4th emerald. No one got hurt, and even Tails helped out with 24 rings.

Mystic Cave Zone's song is pretty rad, isn't it? It also has a pretty nice background scrolling thing, I think I used the SMBX version of it as a base for a stage BG I made due to how many parallax layers it had.

The stage has a lot of types of spikes, doesn't it? Vertical ones that pop in and out, horizontal spikes attached to moving wall things, swinging platforms with spikes on the edges, spinning spike ball mace thingies, and my favorite, the green chunk of land with spikes on it, that I always thought looked like a cat's paw. 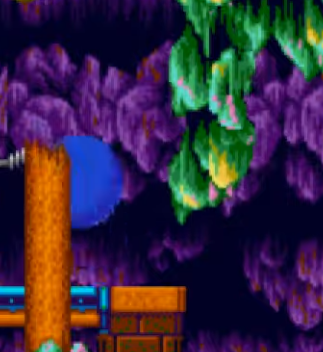 Mystic Cave Zone Act 2 has its own "special" relationship with spikes, something that the mobile phone version ended up changing. Nothing that's actually hidden that you should worry about... I'll explain more tomorrow if someone doesn't get to it before me.
Top

Honestly, much like raocow and Hilltop Zone, this is the one area in this game I invariably forget exists. Its violet hues must moonlight in the ultra range, for it repeatedly fades to invisibility in my poor, three-color-receptored brain.
Top

Hey, I noticed raocow's youtube avatar changed back to his drawn computer thing. Did that just happen?
Regardless, nice to see its return.

Chirei wrote: man I think I would get mowed down by these special stages even over multiple tries

I think you forgot about the ones for the Super Emeralds. Those are nuts.

yeah the avatar change is pretty recent, it can take a bit to propagate !
the chillaxest of dragons

Reecer7
Crack is fun and nice and a good time!
Posts: 240
Joined: 4 years ago
Pronouns: he/him/his

as someone who is only familiar with the classique sonic games on a pretty casual level and never actually got around to playing them/watching someone else play them, this is one of the stages that i have never heard of before. and it's pretty good! what's up with that!

also, i can't believe that two whole genesis sonic game songs use the same exact Entrance of the Gladiators quote (the circus song part), and that this first one is clearly the better implementation. i expect better of you in musical composition, michael jackson.
call me reecer6, not reecer7, please! gotta maintain that same internet brand.
I do a lot more things at my tumblr here than I do here! So, check it out, if you think I'm cool!
Top

raocow wrote: ↑ yeah the avatar change is pretty recent, it can take a bit to propagate !

Kleetus
Posts: 211
Joined: 11 months ago
Location: Under a starless sky (due to light pollution)

Reecer7 wrote: as someone who is only familiar with the classique sonic games on a pretty casual level and never actually got around to playing them/watching someone else play them, this is one of the stages that i have never heard of before. and it's pretty good! what's up with that!

Same boat here. The gimmicks and obstacles in the level are pretty novel. And the colours of the level are striking (although I suspect some might find them overbearing).

Sebby19 wrote: ↑ No one got hurt, and even Tails helped out with 24 rings.

Congratulations Tails you have earned the rank of "Slightly Useful".
Top

I will never forget Mystic Cave Zone because the second act has the pit. If you've played the game you probably know the one I'm talking about. I died so many times because of that monstrosity.
Top

honestly a sonic 2 LP without showcasing The Pit is invalid. raocow, you have to restart the game now
i've honestly never played a video game in my life

Cyril wrote: ↑ honestly a sonic 2 LP without showcasing The Pit is invalid. raocow, you have to restart the game now

*probably won't happen
Why don't you eat me?

Good old Mystic Quest Tape 2 And Tubular Ocean Dove Press The Ladder Get A Flub Zone Act 2. It's the last zone to have a 2P VS mode version, and, as mentioned by others, home of THE PIT.

The Pit/Death Pit/Death Hole/Whatever people call it, is a specific pit where, should you fall down it, you'll be stuck with spikes, too high to jump out of. If you're invincible,

are in Super Sonic form

, or just keep recollecting your rings by mistake, you'll be stuck there for a good long while.

The mobile version of the game fixed it... by replacing the pit with a warp to a brand new single act zone based on the famous lost Sonic 2 level, Hidden Palace Zone, complete with its own boss! Said zone reuses the 2P Mystic Cave Zone song, which others might be able to explain better as I've lost track of the reasoning debates on that, but Hidden Palace had its own unused theme: While it loops in the Sound Test version, the original demo of the song has an ending, leading to more questions...
Top

I can't believe raocow managed to go through Mystic Cave Zone without falling into That Pit.

I mean, I guess that's a good thing, but it leaves people who haven't played the game themselves before with a slightly more positive impression of the zone than I suspect a lot of players ended up with back in the day.
Top

I remember Death Egg Zone in Sonic & Knuckles had a similar dead end pit. No spikes,, just a one way door to a deep bottomless pit, no way to jump out. You could fly out with Tails, but good luck coordinating two characters on a keyboard by yourself.

it amuses me every time that when sonic jumps off a pulley he stays in the pulley-grabbing pose, it just looks so silly
convenient noise thread for stress-relief purposes
Top

DinnerSonic wrote: ↑ Said zone reuses the 2P Mystic Cave Zone song, which others might be able to explain better as I've lost track of the reasoning debates on that, but Hidden Palace had its own unused theme:

Hidden Palace always had the 2P Mystic Cave Zone music, even in the betas, and I'm pretty sure there was once an interview where someone said that the unused song was for a cutscene you got when you unlocked Super Sonic.
twitter (spicy at times!) | avatar by kuma

raocow wrote: ↑ yeah the avatar change is pretty recent, it can take a bit to propagate !

thank you, melody, for all the nice memories