All The S@nics - ℝ - Can YOU Feel The Sunshine?

this is the place where lps are being talked about. it's important to talk about games being played on the internet.
Post Reply
2875 posts

During act 2 I thought we lost rao's voice track. The silence was sudden.

That happened right as I was thinking that a nice little automated breather section that plays itself and leads you right to the boss was a refreshing way to finish up the tube maze zone and surprisingly friendly from this game.

Now that E3 business and related recovery periods are over...
All the Green Hill Zones count:
*I'm counting "Green Hills" from the other day as a Green Hill Zone

The next level has a cool aesthetic if I remember right! I do not, however, know if the level design is still BS or will just be normal difficult... I remember the next 8-bit platformer being better, but that's possibly just a memory of "Oh, this has new, cool stuff!" and being dumb enough to ignore cheap layouts.

Tossed Salad and Scrambled Eggs Zone Act 3 was kinda hilarious. Not often I enjoy schadenfreude, but going from "Oh, little automated cool segment before the boss" to sudden no-ring spike pit after all the previous level stuff AND the power issue gave me a chuckle. Moreso when the boss was kinda neat but

(Fun fact: The Archie comic used this stage briefly in the backstory for a reimagined version of an Adventures of Sonic the Hedgehog character before the comic died.)
Top

Silver Sonic is, canonically, the first robotic doppelganger of Sonic to ever appear in the series. The robot is also only named Silver Sonic in the USA, as in Japan it is simply known as Mecha Sonic.

BOB is an acronym for BOB is Only BOB etc.
Top 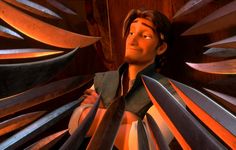 Awoo
Wolf girls? In *my* area? It's more likely than you think!
Posts: 1238
Joined: 1 year ago
Pronouns: he/him/his
Location: your area

I do too! I grew up with it for Game Gear, though, so I've had a huge amount of experience with it. It's pretty hard, but it still holds a very special place in my heart next to both Sonic 1 for it and Sonic Chaos.
Had a bunch of other games for it too, but I doubt that raocow will LP any of 'em.

Totally off-topic:
one of those games was the licensed Taz-Mania game. It has some of the absolute *best* video game music ever made:


seriously, just jump to literally any point of the video


that game has probably the *worst* video game soundtrack I've ever heard. Ever. The entire thing. My sister still played the hell out of it for whatever reason though.

I feel like this game doesn't know how to actually be hard. Like, sure, sometimes it's incredibly hard, but usually the difficulty is just out of tedium and unfairness. When the level isn't unfair or broken it's a complete breeze. Anyway I love it because it reassures me that even if I make a completely janky badly designed game, it'll still be better than sonic 2 master system.
wow cool im on spotify so what big deal i-it's not like I care or anything...
Top

Ashan
The world has become a place
Posts: 2209
Joined: 9 years ago
Location: Canada

You get a game over screen after you beat the game, cause there really is no winning. Just for playing this game, you the player have lost.

Katazuki
The Return of the Return Of
Posts: 669
Joined: 5 years ago
Pronouns: that guy
Location: ...Where am I?

Yeah I was right, this is the game where Tails dies if you don't get all the Emeralds.

Tails isn't dead, he's making art in another part of the talkhaus: viewtopic.php?f=8&t=17762

So I know there's a certain portion of the Sonic fanbase who does the whole "Eggman who? He'll always be Robotnik to me." schtick, and I just have to wonder how they actually reconcile that attitude with the obvious egg theme that existed even pre-Sonic Adventure.

Like, just in this game you've got both Scrambled Egg Zone and Crystal Egg Zone, in Sonic Chaos you've got

, and in the Genesis titles of course you've got

The Death Egg, which is technically a zone in both Sonic 2 and Sonic & Knuckles

What kind of justification does a person come up with for stuff like that when they don't know about/are denying the whole Eggman thing?
Top

Fun Sonic 2 SMS Fact: There's an unused song, at least in the Master System version, this sparkly little tune. Maybe it was an alternate for Crystal Egg, or perhaps a different Good/Bad Ending song?

Speaking of, have that Bad Ending everyone talks about that you would have gotten if you missed one of the Chaos Emeralds! 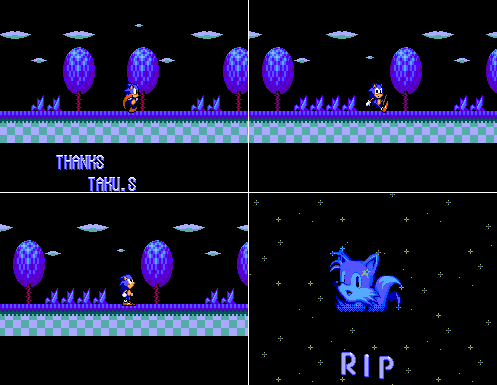 While the player can normally only access Crystal Egg Zone after obtaining all of the Chaos Emeralds, it is also possible to get here via the Level Select. Notably, the game does check if you have all six emeralds before allowing you to see the Good Ending, as beating Crystal Egg using the level select still plays the bad ending.

Getting the bad ending in the game is like

Oh it's the talkhaus birthday?

Also yeah good job clearing it raocow. That lact act was the bane of a friend who just gave up playing, but I won't say it was a better boss than Mecha Sonic, this boss is just a hit and run and you spend most of the time waiting for it to calm down, it's not fun.

That was the first game I ever owned, so of course I don't think like when I was 6, but I enjoyed it because it has a lot of variety for a SMS game, you don't find many like that, it's pretty colorful, good music. Just the level design is bad. Aspect did what they could, knowing Sonic must go fast, so levels must be quick, rewarding you better if you clear them fastly, so levels are short, but the implemented gimmicks are a hindrance to that, if they were clearly explained like in Super Mario World, but hey we have limitations there, so it was explained in the manual, many SMS games were like that, RTFM or GTFO.

A remake of this game would be amazing, although I heard there is a romhack of it.

The THANKS HITMEN in the credits made me laugh, maybe they were hired to kill the people who refused to sell this game.
And it was a LUNARIAN conspiracy!
I see what you did there...
Top

raocow enjoyed a carol boss. ok now this is epic
Well it is a decent hack but sometime its just too repetitif there no level that actually pop in your face and your like oh yeah that level they all ressemble themselves and just monster along the way.

Awoo wrote: I do too! I grew up with it for Game Gear, though, so I've had a huge amount of experience with it. It's pretty hard, but it still holds a very special place in my heart next to both Sonic 1 for it and Sonic Chaos.
Had a bunch of other games for it too, but I doubt that raocow will LP any of 'em.

it having quite a few rpgs compared to the game boy helps
twitter (spicy at times!) | avatar by kuma

I never really cared for this one. It's just sort of a mess in a lot of aspects from the difficulty curve to the collecting the Emeralds to just being a level design mess. Sort of stopped after that point with the 8-bit/Game Gear games, but I think at least two of the three this Aspect company did after are definitely more enjoyable.
Top

KobaBeach wrote: ↑ it having quite a few rpgs compared to the game boy helps

this is kinda weird to me because i've always thought of the gb as a platform with a decent amount of rpgs, but that might just be indicative of what i actually played on it moreso than anything
Top
Post Reply
2875 posts