this is the place where lps are being talked about. it's important to talk about games being played on the internet.
Post Reply
354 posts

Reported
Well it is a decent hack but sometime its just too repetitif there no level that actually pop in your face and your like oh yeah that level they all ressemble themselves and just monster along the way.

At the start of the game I thought it was weird not seeing Rayman, but now that he's shown up I just can't help but miss Globox.

what about the other character, let them do the finale

you did the thing

I'm goona make several posts again. One trying to explain what the Magician is doing, and another for my initial reaction.

So there was a lot of cut content from the game, that would have explained a lot of things. First, the official website and a later trailer showed Mr. Dark (Rayman 1 villain) would be making his return here. With that in mind, it was supposed to be revealed that the Magician (an ally in the 1st game) became a Mr. Dark fanboy, as posed as him for this game. In the final game, the most we see of this is a 'I heart Mr. Dark' poster in the background of his chamber.

What was completely cut was his motivation for turning traitorous. Apparently he was made fun of by the others in magic school, for his lack of actual magic abilities. This probably explains the gigantic technological sky fortress.
I also believe that the large glowing orb he crashed into at the end was filled with all the lums you were collecting.

Beta64 has a very good video about all the development versions and cut content from Origins: https://www.youtube.com/watch?v=kJf3eHbjoZM

As for what I thought of the finale... colour me a bit disappointed. I had the feeling things were rushed at the end on the development side.

Let's start with the 'boss rush', if you can even call it that. 2 out of the 4 main bosses? Huh? Were the remix of the Dragon's main stomach? And a robot sea serpent? And there was no proper final boss! They even made music for it!

The chase in the middle was fine.

But the mosquito section just, ends. It doesn't even look like shooting parts off the pirate ship even does anything. Or even required.

Fun fact, I can now link the video of the developers playing Rayman Origins live during E3 2011. This is because the last level they played was today's finale. Of course, the Magician was replaced with the chest they were chasing through all the levels.

Cyber Death Globox for the postgame?

rayman legends going on the end of the b-side list when?

i honestly think it's a better game than origins, which is already really good
though not as hard. but that's also kinda for the better?
i've honestly never played a video game in my life

it'll be added to the list next patapon spotzone (probably as an auto-win or something), don't worry 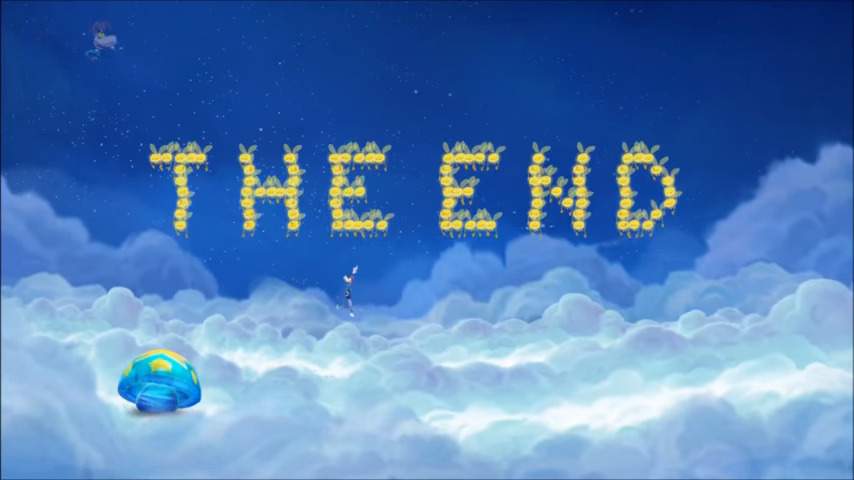 Yeah, Land of the Livid Dead is an absolutely amazing end for the game, sans the boss, which kinda sucks. But the level itself is SO GOOD, especially the super fast snake part.

And the music is the BEST.


And the entire game.

(this is both songs, the second is called "Chasing a Dream")
Top

Congrats on beating the game raocow! Having played and really enjoyed Legends, it was nice to see Origins, and where the sequel improved on the original.
It did seem strange to me how many segments of this final level felt like they should've been auto-scrolling.

Congrats on beating the game, raocow! All that for a fairy that doesn't even give you any powers! At least it means our heroes should be able to do what they were doing in the intro video in peace and their neighbors shouldn't get super angery at them and throw things!

Can't wait to see what's next! I hope it's something good!

Here's the full music that plays when Voodoo Mama is painting her nails.
.

A quick rundown of some of the main games in the series (sticking to the platformers, and ignoring ports).

-Rayman 1: An excellent 2d platfomer, but is tough as nails, as I mentioned before. If this is voted in the next poll, know you will be relying on the 99 lives cheat code, among others. A lot.
-There is also a similar GBC version as well. Much easier. It's notable for having a different fight with Mr. Dark, that I feel is more satisfying.
-Rayman 2: A a friggin fantastic 3d platformer. I highly recommend this get voted in the next patreon poll.
-This also has a GBC version, that runs on the same engine as the first game. I didn't play all of this one as I got bored, but I think that was more because I just played the first one in 1 sitting.
-Rayman 3: I can't say much since I never got it myself (despite owning a gamecube), but I heard its probably as good as Rayman 2.
-The handheld version is on the GBA this time, and is a great improvement. Strangely, it has more elements from Rayman 2 than 3, but it's still really good. You can unlock 10 more levels if you connect to the GC version.
-Rayman: Hoodlum's: Another GBA game based on Rayman 3, this one is an isometric platfomer. You play as Rayman and Globox.
-Rayman Ravings Rabbids (GBA): Unlike the console versions, which were minigame collections, this is another 2D platformer, and our only glimpse at what the console version of Rayman 4 would have looked like, if the didn't morph it into just minigames. This game is okay, but all the bosses except the 1st and final are essentially the same.
-Rayman Ravings Rabbids (DS): Unlike the above, this is a 2D platfomer with 3D graphics. I know next to nothing on how this plays out.

i don't like rayman 2 much, honestly, it's very "proto-3d platformer" and i never had much fun with it. rayman 3 is pretty good though, but i haven't played it in like, over a decade so
i've honestly never played a video game in my life

I got a huge soft spot for Rayman 2 because I played it on and off a bunch as a kid, borrowing it from friends for my N64 but never getting far, later finally getting my hands on the PS2 version and finishing that, and it blew my mind because it's far more expansive than the N64 version, but also I finally got past like the first boss of FOUR and could see how insanely huge the game actually was.

That said, it is quite janky, yes. It's also weirdly difficult at more or less random spots and 100%ing it is a serious nightmare.

I played a bit of Rayman 3, but I didn't really get into it. I think it has too many extra systems grafted on top of it that don't really add to the gameplay.

Back to Rayman 2: for some reason, it keeps getting ported to every system under the sun. It's on Playstation 1 AND 2, Dreamcast, PC, and both the DS AND the 3DS. Utterly bizarre.
Top

Feel slightly awkward after abandoning this dead gay forum for 290723178 decades but I just wanted to say: what a good fuckin game this is, like God damn

So glad the series didn't die with Rabbids, like even if it's dead now it died with dignity
Top

I wouldn't say Rayman is dead. Rayman Legends was only released just a few years ago, and was recently ported again to the Switch. Plus Rayman appeared as a Spirit in Smash Ultimate (crossing fingers he'll be DLC!)

Also, Ancel said he'll be interested in going back to Rayman after Beyond Good and Evil 2. Let's just hope Ubisoft doesn't act like Ubisoft around then.


While I didn't mention them above, there is also two games on IOS called Rayman Adventure and Rayman Fiesta Run. These are styled after Origins, and I believe it's nothing but platforming at high speed. raocow should check them out for himself, since he said he liked that part of the game the best.

Always liked this one more than Legends since it was a white-knuckle platforming paradise. Boss fights are pretty much an afterthought, and I'm fine with that style of mentality for a game more focused on running and jumping and speed runs than anything. Like you said, when it gets to the slower precision-based stuff, it loses a step. Glad this game didn't try to cram in too many things to slow it down.
Top
Post Reply
354 posts