this is the place where lps are being talked about. it's important to talk about games being played on the internet.
Post Reply
878 posts

A little over a week ago, I started doing daily 30-minute poster designs to practice just doing fun graphic design for fun's sake. Normally I just pick words at random, but I decided to do a little something based on Cortex (and accidently spent an hour on it instead of 30 minutes, haha..)

Anyway I had fun: 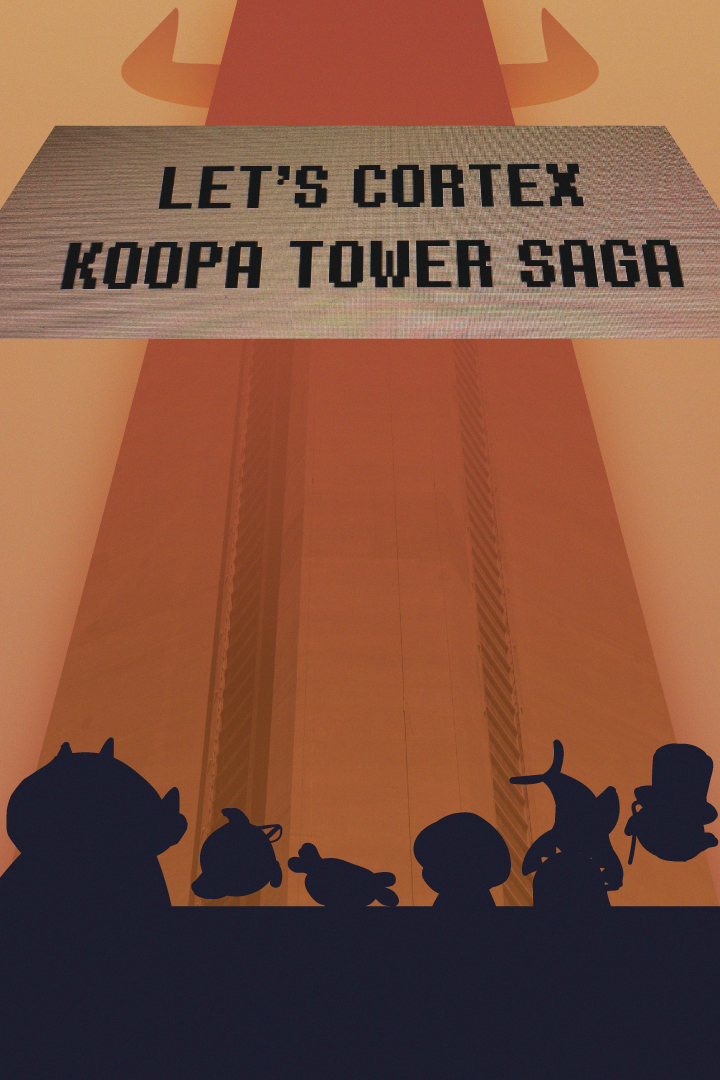 Just think, if Let's Cortex was put into book form....transcripts, inner thoughts, and detailed story action. Maybe a few liberties to spice up the context a bit.
......This is so tempting to do if more of those posters were made. If only every session was recorded and shown. my writing fingers are itching at the thought. That looks great xface!

Nice stuff ChibiDuo, very foreboding. ^^ Also makes me realise how long we've been in the tower, I might be wrong... but I think we've been in it longer than we were in ASMT at this point.
Top

Whilst i'm still woefully behind, i'm finally almost done with the stuff i wanted to draw from the sessions i had listened to, so I could be moving on to new stuff soon-ish. Also, the actual line said was more like "Well, you just assaulted my friend" but i felt like that might've been a bit strange to read without the context lol

The Destroyer of Worlds
I am become death
Posts: 1487
Joined: 7 years ago

Postby The Destroyer of Worlds » 11 months ago

Hahaha these pictures all got brought up this session, incidentally. They're all so wonderful!!!!!

Also, incidentally, for those who are keeping up with the series.... Book 2 just ended and we recorded the first session of Book 3.... So look forward to that!

raocow wrote:Dang it Oyster this level is not called Peregrine Penguin and the Soft Bon-Bon, it clearly says Ghost House with a Ghost in It!

I'm looking forward to seeing the end of book 2 aired, because a lot went down there.

Ah yes, I think that was literally one of the first things that happened in ASMT? Wasn't even the House of Turner... just some random guarded house, gotta love Duty to Comrades sometimes. ^^
Top

Xirix wrote: ↑ Ah yes, I think that was literally one of the first things that happened in ASMT? Wasn't even the House of Turner... just some random guarded house, gotta love Duty to Comrades sometimes. ^^

Yeah, it's funny how easy the gang gets in trouble.

I will be looking forward to how this goes. after the last episode, I am a bit confused on what's going on, but I'm sure things will make sense in a bit. Also looking forward to the reaction after Rezcow's signature for his number one fan.
Also, still work in progress, but here's a small present of what I have, thanks to a little help.

I have more set up for the angels on how they would attack, but the shuffling/basic movements was the toughest to nail down first.

That's cute Kellins! Although I don't really know what the "angels" are yet lol
Also, what's up with the bots on the latest video? Like, the videos have seemed to be disliked bombed for whatever reason, but now there's straigh up bots. Let's Cortex truly is strange.

Eh, no idea. There are some invididuals on the discord talkhaus who are very vocal about not liking Cortex, despite for instance one of them saying they only watched the first 5 minutes of episode 1, yet will jump at the opportunity to shit on the series whenever it's brought up.

Not naming any names because I have no idea who's doing it obviously, like it's fine if you don't like the series, but going out of your way to dislike bomb every video in a series, it's just kinda sad, and shouldn't be paid attention to, if you like Cortex you like Cortex, some arbitrary numbers on a video shouldn't effect that.


On a brighter note, good stuff coming up. I laughed a bit too much editing the latest one, best Goomba in the entire series I don't care what anyone else says.

Well, like any table top series, it does start off a little slow. But for people looking for podcast or audio books kind of thing, this is really good.
I have followed raocow years before sending my little concept fanworks of Rezcow, Ceaser, Jakey Boy, and Boolina. And tge fact it was used as a title card for an episode got me to join the forum.
I can understand why people won't like it since it is largely different than the game playing random spouts of crazy words of gold that raocow dishes out in his usual 10-15 minute time frame.
But just the fact it's friends enjoying the sessions, having laughs and getting into thier own kind of troubles and mishaps that I have been enjoying the series and waiting for more. For my sense of imagination, this has been a blast for me.

So, at least for me, I want to thank you all for continuing this and glad you all are having fun still.

Xirix wrote: ↑ Eh, no idea. There are some invididuals on the discord talkhaus who are very vocal about not liking Cortex, despite for instance one of them saying they only watched the first 5 minutes of episode 1, yet will jump at the opportunity to shit on the series whenever it's brought up.

Well, sucks to hear that. Hadn't really mentioned it before becase i figured i should just pay no mind to it, but with the straight up bots on the latest episode it just struck me as funny.

Spoiler if you haven't listened to book 2 episode 73 yet.
I'm weird, but it was a thought I really couldn't pass up.

Also giving only has one v

Sorry if this isn't the place for dumb questions, but if the last thing I've listened to was the final Book One upload on YT, is the next best entry point to newer content still the "1.5" series? I started on them when they were still up on Twitch, but stopped an episode or two in after being convinced that I was doing something wrong.
Top

Ludicrine wrote: ↑ Sorry if this isn't the place for dumb questions, but if the last thing I've listened to was the final Book One upload on YT, is the next best entry point to newer content still the "1.5" series? I started on them when they were still up on Twitch, but stopped an episode or two in after being convinced that I was doing something wrong.

Yeah. it continues from where you found it. It takes a while to follow what was happening, But after awhile, things will all start connecting again. You are following the right order though, so no worries.

As for Book 2 episode 74. There seems to be a moment where there was a series of high pitched beeping at random. But I'm glad some things were answered, but I am still puzzled on a few other things.

That's right Ludicrine, if you follow the order in the first post you're golden. Unfortunately due to several reasons there was a gap in recording between Book 1 and Book 1.5 so it may seem a bit fragmented, that's why there's both an audio summary of what happened between Books, and some text summaries I wrote for some of the missing sessions.

Admittedly it's not great, but it's kinda the best we could do, once you get to the Book 2 videos there are no more gaps however.


Also yeah, Book 2 Ep 73 and 74 Dito's audio broke because his computer died and it had to be recovered, the audio was usable but there were a lot of weird beeping in the audio that I had to manually remove, some couldn't really be removed well without removing what was being said, it's just for those two episodes though, sorry about that.
Top

Now, i don't know why my past self thought it was so important to write down the bread delivery scene as one of the things to draw, but imma respect his plans and go ahead and do it.
I only have one more bread related drawing before I can resume listening.

Never doubt yourself my dude, Bread was super important in those episodes.

Alright, here's the last thing I had written down to draw! Jakey Boy's face reminds me a bit of Steve Carell for some reason.
Also, It's times like these where I want to kick my past self in the ass for giving him a hair style that doesn't make any sense- I actually have no idea how to draw it.

Oh christ that's when he started going nuts in the House of Turner, burning/flooding everything. XD That face man.., that face.