La-Mulana 2 - that's what indiana jones would do

this is the place where lps are being talked about. it's important to talk about games being played on the internet.
Post Reply
686 posts 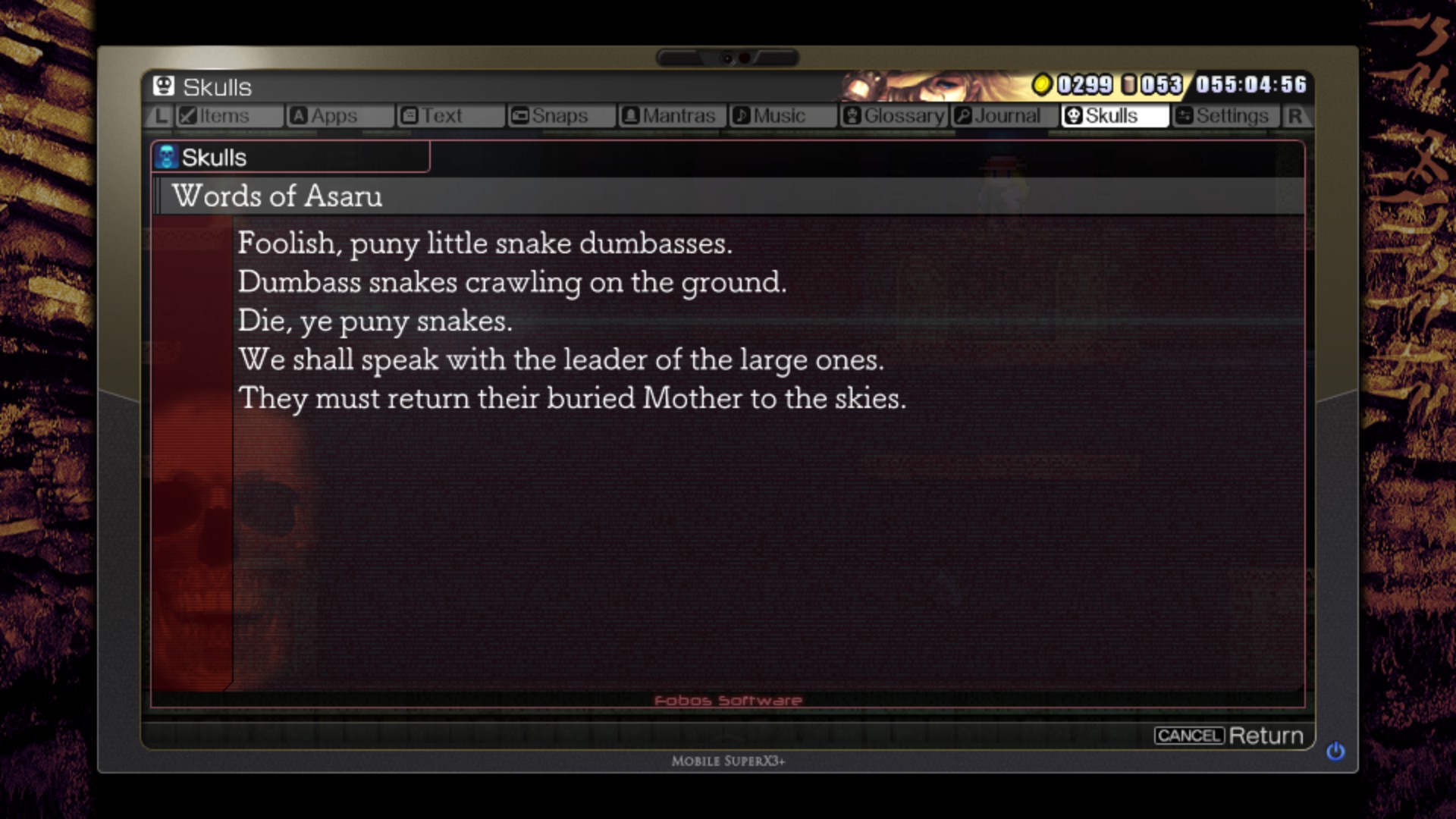 You are correct, how lame.

The wiki AND Voltgloss's notes are incorrect...I checked those before confirming your statement.
Top

You are correct, how lame.

I checked both the wiki AND Voltgloss's notes, before I confirmed your statement.

Did you just use my screenshot without consent? :kappa:
Now everybody can see my glorious 55 hours playtime

congrats on your date, rao! slaying monsters isn't the first thing i think of when it comes to romantic outings but y'know what it really looks like you two made it work
i've honestly never played a video game in my life

And hey, we saw the rays! Guess that means tomorrow, we lose our only ankh jewel to the abyss.
Avatar by weeniekishibe

Re: The 4th Children: My theory is that the unfinished Tower of Oannes section of the game mentioned on the Kickstarter might have expanded on their lore, since Oannes was a half-man/half-fish being mentioned in LM1 in connection to the Spring in the Sky, which IIRC was also connected to the 4th Children.

Tangentially, I like to think that the 3rd Children's kingdom on the surface that was destroyed by a flood was Atlantis, and that all the world legends based on La-Mulana spread outward from there.

Re: The Annunaki: I like to think that their declining intelligence over time is why the Crystal Skull messages get increasingly desperate and foul-mouthed. I'm still not sure what the fetus tubes in Nibiru are supposed to be.

Question: Is there anywhere online where you can read all of the glossary texts?
Ultra the Multi-Alien is my homeboy.
Top

It's too late for raocow to get this dialogue now I'm pretty sure, but Fobos would have mentioned in one of his dialogues that the reason the fourth children can't be found in Eg-Lana is likely because their civilization never became advanced enough to produce the needs and wants that lead to war and subsequently get sealed away. Which honestly...makes them sound kind of chill? Still a shame you never get to meet one in person.
Top

Duker
The man with the fairy
Posts: 176
Joined: 10 years ago
Location: The Cold North

Filby wrote: ↑ Question: Is there anywhere online where you can read all of the glossary texts?

Very cute that raocow is now on a first-name basis with the Weapon Fairy.

I always assumed that the bipedal fish running around in LM1's Spring in the Sky were the remainders of the 4th Children. They even look similar to the 4th Children reconstruction in Gate of Guidance (but without the human arms). But more likely they're just regular enemies.
Top

that orthos thingy from Hall of Malice reminds me of this:
https://www.youtube.com/watch?v=TK6-APWVJN4


props if you know why
ワンワン

BobisOnlyBob
Mythical Quadruped
Posts: 1331
Joined: 7 years ago
Location: the world is no longer a place

I always just assumed that the 4th children were largely useless fishmen and the Annunaki screaming at them to seal the mother and its child just led to them using their limited capabilities to just... evoke the Annunaki in what art and architecture they were capable of like, "yup, these are our gods, they yell a lot. No idea why."

raocow
the death of the incredible huge
Posts: 3415
Joined: 11 years ago
Location: maybe the Wizards are the most complex, and the sales guys are up their daily

the 4th children: too chill to be useful
the chillaxest of dragons

As a player of both of these games, the harder the boss is, the less friendly for youtube the model is.
Nothing to see here
Top

It turns out the Sakit quest did have a really cool reward after all, it just wasn't item or gameplay related. With this series being almost entirely about fighting every random being you find in the ruins, getting to actually share a moment with one of them instead feels so good.

Is there any harm in telling raocow to load an earlier save to use all the mantra's at once? Literally locked him out of seeing what he does 2 minutes before he decided to try it for himself.

Now that he has all 6 Dissonance, incanting all the mantras simultaneously no longer instantly kills the character.

It's kind of silly how two of the dissonances are basically locked behind her.


Advent Azure wrote:
Is there any harm in telling raocow to load an earlier save to use all the mantra's at once? Literally locked him out of seeing what he does 2 minutes before he decided to try it for himself.

Now that he has all 6 Dissonance, incanting all the mantras simultaneously no longer instantly kills the character.

I am of the opinion that we should tell him this now.

Also hoo boy am I excited for what's coming up. The awakening of the True Shrine of the Mother was cool and all but it doesn't hold a candle to Ragnarok.

Someone in the Youtube comments mentioned the mantras thing already, but I would also be in agreement about telling him.
Top

Lumisa looked so happy drinking with Sakit, it made me smile

thatguyif
Posts: 602
Joined: 6 years ago
Pronouns: We Are The 99%
Location: Over There

So, this is the order I remember raocow going in in terms of Guardians:

While there is no explictly intended order, this is what I've seen people do for the order:
Fafnir➡Vritra➡Kujata➡Anu➡Jormungand➡Aten-Ra➡Echidna➡Surtr➡Hel

That said, the middle three are kind of the ones tossed around the most. However, Hel, by virtue of several factors you may have noticed, is intended be last in this sequence.

In any case, the journey is nearing its end...I dunno how long it'll take, but I'm willing to bet he'll be done by (American) Thanksgiving.

...it's possible to fight anu before jordan? huh. i'm really surprised by that because i remember being completely and totally walled by needing to fight jordan at one point
i've honestly never played a video game in my life

I really didn't care for Echidna at all. Tiamat was my favorite guardian in the first game but Echidna just ends up feeling like a really half-assed knockoff of her. She's more tedious to fight, dodging her attacks is a mess since you're highly encouraged to rely on subweapons for this fight, and she has WAY the hell too much health.

She wasn't my least favorite of the guardians though. I'd probably have to say Jormungand wins that contest due to the infuriatingly stupid inability to freaking face left during the entirety of the fight. Surtr and Anu were both pretty bad too though. Hel was way too difficult for me but other than the whole getting crushed against the ceiling thing (the source of way the hell too many deaths since she liked to hit me out of a jump as I was trying to descend knocking me back on to a platform that was high enough that I couldn't get off it before getting crushed) but unlike those others I think she was a decent fight nonetheless.

Fafnir and Aten-Ra were the best fights in my opinion. Both were pretty unique while not being tedious and annoying fights. Vritra wasn't an awful fight but felt more or less like an Ellmac knockoff. Kujita wasn't the worst fight but some of its weak points being so difficult to actually hit was obnoxious. Anu was annoying due to the fact you basically had to use flares to defeat him and it was still a pain in the ass to actually hit them with him. He'd always manage to time things just right so that when I finally got him swinging far enough to the side to hit him with a flare, he'd switch into an attack that would nullify my hit so like 75% of my flares just went to waste. And meleeing him is really not an option.

Game has nine guardians and only three are particularly good which was really quite disappointing.

Also while I haven't fought it myself, the final boss seemed pretty unimpressive as well. It felt to me like a mix of Vritra and Echidna in the context of it feeling like a cheap knockoff of its LM1 equivalent with some added frustrations.

Duker
The man with the fairy
Posts: 176
Joined: 10 years ago
Location: The Cold North

So, this is the order I remember raocow going in in terms of Guardians:

While there is no explictly intended order, this is what I've seen people do for the order:
Fafnir➡Vritra➡Kujata➡Anu➡Jormungand➡Aten-Ra➡Echidna➡Surtr➡Hel