this is the place where lps are being talked about. it's important to talk about games being played on the internet.
Post Reply
5018 posts

raocow wrote: ↑ definitely 2021 at least. like, heroes itself is gonna be two months

so if you plan on doing battle that way...
i've honestly never played a video game in my life

At this point the cream sign is an inadvertent running gag
Well it is a decent hack but sometime its just too repetitif there no level that actually pop in your face and your like oh yeah that level they all ressemble themselves and just monster along the way.

Really can't blame you for the savestate. After playing these on the Steam version, I WISH I had access to one to plop right before the final section. It's a special kind of sadism and laziness to put the main challenge of the mission right at the end of what is essentially a glorified two and a half minute cutscene. Even worse when the challenge is inherently unfair and practically impossible to get on your first few attempts at LEAST.

AND THEY PULLED THIS TWICE.

AND THEY PULLED THIS TWICE.

AND THE SECOND ONE IS STRAIGHT RNG

BobisOnlyBob
Mythical Quadruped
Posts: 1303
Joined: 7 years ago
Location: the world is no longer a place


Cybershell is back? and commenting on the very same game raocow is LPing? Is it christmas? checks calendar oh. oh no. oh no no no

Never. Ends.
Why don't you eat me?

raocow
the death of the incredible huge
Posts: 3354
Joined: 11 years ago
Location: maybe the Wizards are the most complex, and the sales guys are up their daily

I did do gamegear spinball you fool
the chillaxest of dragons 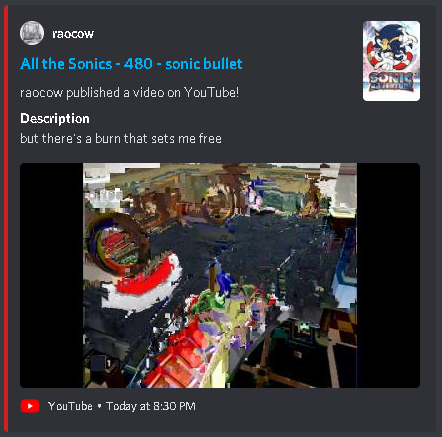 this genuinely looks so cool what the hell

i can sorta tell it's inside the station square hotel but this is way more scrambled than the video embed thumbnails usually get, it looks like sonic's riding on the head of a dragon or something

today sonic gives christopher thorndyke 100 rings to fuck off
Why don't you eat me?

Just realized that the running down the building segment is like a Sonic 06 mach speed part, but way better
Top

Is raocow purposefully choosing these thumbnails? They're great.
You cannot add yourself to the friends list.

Paragraph wrote: ↑ Just realized that the running down the building segment is like a Sonic 06 mach speed part, but way better

Anad
Posts: 27
Joined: 4 years ago
Pronouns: Any
Location: That really cold place, north of the US.

So raocow's actually been doing a surprisingly good job at finding the missions so far but there is one mission in the coming videos that I do want to pre-emptively offer a hint should he very-likely get stumped. Specifically, Mission 45: it's an exploration mission and, like all the others, it has a very obvious clue which essentially just outright tells you where it is: sort of! It does direct you to a specific and unique landmark which, if you know where it is, makes completing the mission a joke (like all of the other exploration missions) however, I imagine, most players never see this landmark while playing the game casually (or quickly) as it's hidden in a particularly-cool secret nook in one Sonic's stages. I actually found this secret area on my own while playing the stage normally (outside of mission) (I frequently use this to impress people at parties

) so I'm actually personally quite found of it but I imagine raocow won't even know where to start looking for this mission's objective, which is why I'm offering these few spoiler-tagged hints since I imagine using these would be more fair than just outright looking it up in a walkthrough. So:
Mission 45
Description:

Go to a place where the rings are laid in the shape of Sonic's face!

Hint 1 (This should be all you need; really the game should at least tell you what stage it's in):
It's in Final Egg.
Hint 2, if you've explored the area thoroughly and are still stumped:
You can get some incredible height from spindashing up steep inclines.
Hint 3, if you've re-explored the stage with the second hint in mind and still can't find it, it's:
near the end of Final Egg, in the room in which E102 Gamma destroys the Sonic doll, spindash up where the floor curves into the wall to reach a plateau, hanging from the ceiling, with the ring arrangement mentioned in the hint description.
Top

The homing attack in SA1 honestly feels a little scary to do compared to SA2 and I can't quite quantify why. Maybe because you barely pop up at all when you hit a target
convenient noise thread for stress-relief purposes
Top

oh no triple post im gonna be burnt at the steak

I don't think we're actually done with Sonic Adventure. There's an (an, singular) "all emblems" reward, but I don't think rao's save has all the Chao race emblems

of all the things to show off (while rao will probably do it anyway) it should be on the bottom the list
Why don't you eat me?

raocow
the death of the incredible huge
Posts: 3354
Joined: 11 years ago
Location: maybe the Wizards are the most complex, and the sales guys are up their daily

Postby Matt is me » 2 weeks ago

Grounder wrote: ↑ it's a metal sonic skin for sonic that does nothing else at all

Yup. I'm pretty sure in the original thesis rao said that he won't do reskins, only doing runs with other characters when there's a significant difference. At least in the advance games, they control different, so that counts....but this is literally just a reskin. I don't think it bears showing off, based on the rules.
Top
Post Reply
5018 posts

Users browsing this forum: No registered users and 27 guests