90 cents! You're in the Showcase! Provided you don't want to spin again. Would you like to spin again? WELL I WON'T LET YOU! How does that feel?

Back after I...come up with some Showcases!

The (talkhaus) Price is Right is brought to you by...BURN HEAL!! 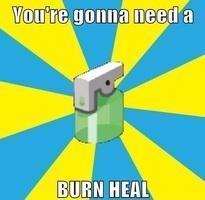 Feel the burn? Then apply this baby down to your soul for just 250 Pokémoney.

Well. Today's big winner, though I use that term loosely, is jayScribble! And our runner up is Animita!

You should know how this works by now. You'll each be shown a Showcase full of prizes. The one who bids closest to the actual price without going over wins. And if you're within $1,000 of the actual price, you win *both* Showcases! As happened last time. Yeah.

Now, since jayScribble...won a bigger item up for bids, he'll get dibs on whether to bid on or pass this showcase to Animita and hope for a better one. Let's see that first Showcase, Ayjo!

Ayjo: This Showcase celebrates the elements of nature, with prizes to match!

*the turntable swivels around to reveal a large collection of fans*

Ayjo: For Wind, we have this selection of electric fans! Two standing, oscillating fans, two box fans, two small desk-sized fans, and three small battery-powered handhelds, all guaranteed to keep you nice and cool when the weather heats up, and all from Whirlwind Electronics!

Ayjo: Next, we have Fire. And what better way to show off a fire, than in...

*models bring out a brick fireplace*

Ayjo: ...this beautiful new fireplace! From Furniture Makers Inc., this indoor fireplace is made of real red bricks and probably some metal or something, and has a sliding glass door. It even locks, to keep inquisitive little children from burning their hands. Santa Claus not included.

Ayjo: A brand new ski boat! From CatSail, where we get *all* our aquatic toys from, this 12-foot, two-seat ski boat will have you zipping across the nearest lake or ocean in style!

Ayjo: Finally, for Earth... how about getting *back* to Mother Earth, and enjoying some time in the Great Outdoors(tm) in this...

*another set of doors swings opened, revealing a motorhome*

Ayjo: Brand new motorhome! From some upstart company called "Nature Lovers", this 16-foot motorhome comfortably sleeps three, has a retractable kitchen table, gas-powered stove, bathroom, and like, one of those rounded couches! Perfect for roughing it without *actually* roughing it!

Ayjo: And these prizes can all be yours, if, and *only* if, the Price is Right!

All right, then. Now, Animita, here's *your* Showcase!

Ayjo: Animita, your Showcase is all about the *eastern* elements! You know, Fire, Water, Earth, Wood, and Metal. So let's get right to it. How about some more Earth in your life, like...

Ayjo: An assortment of potted plants! All manner of flowers, bushes, shrubs, and probably at least a few weeds here in this selection of 12 different plants from "The Gardener". ...that's all it says. "The Gardener". Mysterious. Anyway.

Ayjo: Next up, we have Wood. Like the wooden frame on this...

*another set of doors open, revealing a fancy bed*

Ayjo: Now, if you're still up for more ways to relax, you'll want some Water in your...

Ayjo: ...brand new hot tub! Submerge yourself in this four-seat hot tub from Whirlwater Appliances. It's even got a sleek faux-wood grain look to it, so you *know* it's fancy!

Ayjo: And finally, this classic prize made of Metal has some serious Fire power... it's...

*a fiery red car is driven on stage*

Ayjo: A new car! The Dord Flamer is just hot, man. And I must reiterate what a stupid parody name "Dord" is. Who writes this stuff? I digress. It comes with standard features, air conditioning, rear view mirrors, steering wheel, brake pedals, little fuzzy dice to dangle *from* the rear view mirror, as well as a CD player, and like *eight* cup holders!

Ayjo: And this prize package celebrating the eastern elements can be yours, if the Price is Right!

... ... ... Well, what can I say? This episode did *not* go well *at all*. But this sort of thing *does* happen from time to time, and I hope everyone still had fun playing. In fact, since this episode went *so* poorly, I'm gonna offer anyone who appeared on stage today a chance to come back in Episode 4, rather than having to wait for Episode 5.

For now, though, this is YK, reminding you to help control the pet population. Have your pet spayed or neutered. Goodbye everybody!

*roll credits, as the TPiR theme plays, panning over the audience*

Ayjo: This is Ayjo Na speaking for the Talkhaus Price is Right. Not a Fremantle Media production, suckers!