Wow I completely forgot that there was a boss rush before you confront the extra boss. And the boss refights are a bit harder! I think I'll check them out and see what's changed. Also, maps for the last three worlds: World 6 https://i.imgur.com/1H8hIgd.png I would guess that the path leading down to...

Re: New Super Marisa Land - This is a War

And now that I look at it... this game was released in 2010, the same year as the side shmup game Fairy Wars. It featured the three fairies (Sunny Milk, Luna Child, Star Sapphire) as bosses,

and Marisa as extra stage boss

. No wonder the plot of this game centered around these fairies.

"maybe" is not a confirmation

Re: New Super Marisa Land - This is a War

In the giant mushroom boss fight, what is happening is that the battle changes slightly each time a fairy is knocked out (or is it every three hits overall?). At first the mushroom platforms are all connected at the same height, but then they start to move vertically at different timings, so you cou...

Re: New Super Marisa Land - The World is Suffering

As far as I know, 7-5 is the one level where you can't get all the red stars if you enter as small. You want to bring external powerup since you need to at least be big to get the keystone in the level. The last two red stars in the P-switch mazes are hard to get safely, too. The timing to climb to ...

Re: New Super Marisa Land - 7-2-3 is the Worst Level I Have Probably Ever Played, I Mean, SERIOUSLY, Gah

Yeah, 7-3 made Kilga rage a decade ago. But... Being forced to ride the platforms means you can't just inch your way forward anymore, and the enemies here just loved being in my way anytime I needed to make a jump. The trick is that you can actually traverse in the water basically the entire time - ...

this was posted in ZephyrBurst's discord

That's not a romhack raocow's playlist description plainly says so COVID-19 I wanna say, given that several jurisdictions including my own are in a situation where people need to mostly stay in their homes... it makes me think about Twitch streamers and other video content creators who have been doi...

Re: New Super Marisa Land - Return of the Sky World

Ah, the UFO, stands for undefined fantastic object, it's a fun quirk to use. A "P-balloon in Gradius" aptly describes it, now that I look at it: the early fairy formations at the top of this level do reminds me of that game. I think the way you're supposed to do it is by breaking through the lowest ...

Maps for world 3. World 6 will have to wait for a good reason. https://i.imgur.com/MoBkcpu.png https://i.imgur.com/clIG34P.png This was brought up earlier in the thread, but as you can see from the map, the secret exit in 3-5 is important because it creates a convenient bridge that connects earlier ...

I read Life Goes On as Life Is Strange at first

It's a shame you didn't try to re-explore the upper regions of the very first screen of the water level when you came back with Tenshi - there's a hidden 1UP up there. Yeah but those hidden blocks are scattered throughout the game. It can be fun to look out for suspicious spots where these blocks a...

Re: New Super Marisa Land - There is a Sky Under My Pond

Here's world 5 maps for record-keeping: https://i.imgur.com/gNJeAT5.png https://i.imgur.com/mCUaDp0.png Very linear design compared to other worlds. Tenshi is actually a character that I didn't know when I played this game and only learned about later when playing Scarlet Weather Rhapsody. I wasn't ...

Insomniac and Naughty Dog did work cooperatively together - that's why the first Spyro game also has a demo of Warped. I remember that according to that one Spyro boss who shall not be named , there were regional/version differences with each game and there was a recommended version for each. For in...

About finishing up the game: if you want the playthrough to end on more of a climax, I would say get the last gold relic first before the last in-level gem. The game will have a "finish" either way, but this will be a more satisfying way to end. It's not good to ignore the small planes in the plane ...

Re: New Super Marisa Land - The Witch vs. The Swordsman 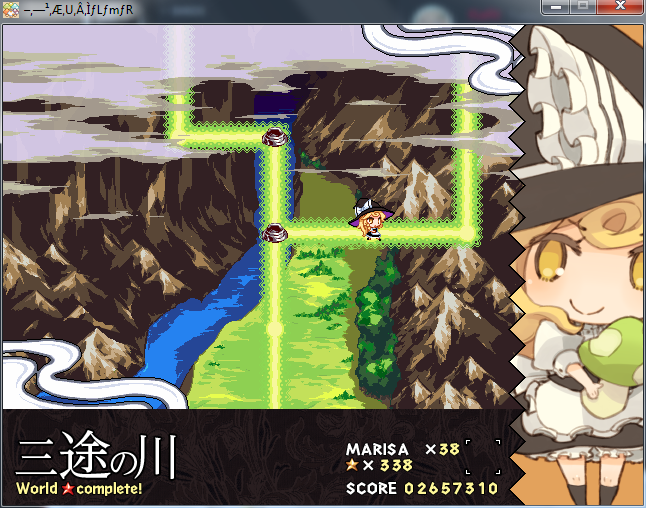 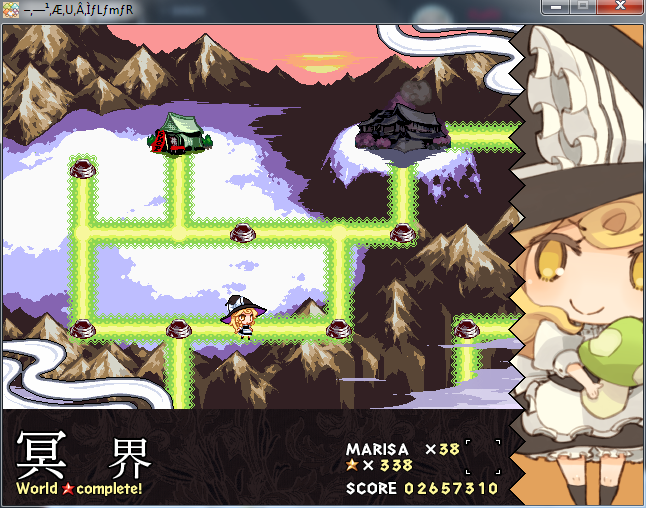 Note that I haven't posted world 3 yet. It comes back quite a bit later.

Rings of Power is a sad reminder that a certain LPer still hasn't finished Superman 64, like really it's been over three years and no episode 10 :ehh: :slow: The plane levels felt simpler to control once I set up & down keys to their respective directions instead of inverted. Some people might say t...

Getting the timer makes you lose masks.

The absurdly long time for sapphire relic in Tomb Wader seems to be based on the player just waiting for the water to recede. Gold and platinum, on the other hand, expect you to hop across what you can land on.

The snowball here works basically like in Yoshi's Island, in that if you stand on one side of it you can roll it towards that side while riding it. The ice physics here affects the momentum you would normally have, but the game still stores that normal momentum. So when you jump, you move with that ...

Re: New Super Marisa Land - I Just...Don't Know What to Say

It looks like you cannot carry the shell enemy to another part of the level. I tried it, and although you can toss an object and pick it up while you're climbing a vine, just like in SMW, the kedama disappeared after screen transition. So here's a guide to controlling Sonic the Hedgehog if you need ...

Watched the video with very low volume It's like there's something about this game or its relic challenges that doesn't work well with raocow, like the circumstances are aligning in a detrimental way... One annoying thing I saw in the level is that the carpets are semi-solid. You can jump through th...

Well I don't think any of us were expecting that

Assuming it's Road Crash, maybe it would have been best to just wait for about a minute to get rid of all the cars and put a save state before getting the clock.

Re: New Super Marisa Land - Revenge of the Ice Pond

I believe the frog suit here is always able to jump at height & distance you normally get at top speed when out of water. Quite unwieldly otherwise for land.
Search found 4658 matches